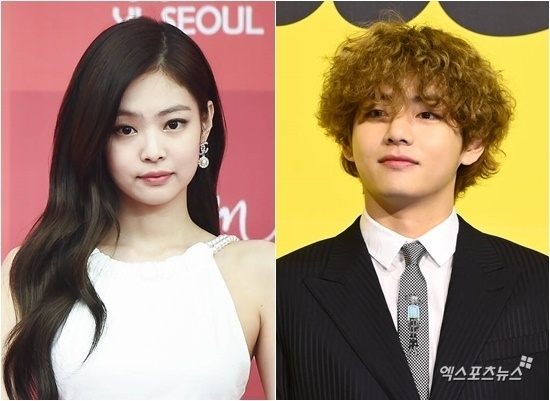 Earlier in May, Jennie and V were swept up in dating rumors when a photo taken on Jeju Island resembling the idols spread on online communities. At the time, YG Entertainment remarked briefly that they had nothing to say regarding the matter.

The rumors recently resurfaced due to a photo that circulated online on August 23 featuring individuals resembling the two at a hair salon and as BLACKPINK will be headed to the United States a day after V’s departure to New York on August 24.

In response to the reports, a source from YG Entertainment simply commented, “BLACKPINK will depart the country on August 25, and they will be busy taking on a tight schedule in the United States including the MTV Video Music Awards performance as well as promotional activities for their second full-length album.”
Cr. Allkpop

1. Whether it’s YG or Hybe, the way it is seems like the best way to deal with the issue

2. Be happy~~ They suit each other

3. What schedule is V attending in the US?

4. Why are trolls even more invested in Jennie-V’s dating rumors than the fans? ㅋㅋ The fans of those 2 shouldn’t pay attention to trolls and just focus on stanning their respective bias happily. No matter how much you try to troll and hate here, it won’t impact V nor Jennie at allㅋㅋ

7. The picture is already out, what is there to ask about?

8. No but is there a reason to react to this positively or negatively?? If you’re not a fan, don’t pay attention and stop with your delusionsㅋㅋㅋㅋㅋㅋㅋㅋ

9. What will they gain from acknowledging it aside from you guys dragging them even more? Who even have to acknowledge when they like someone?