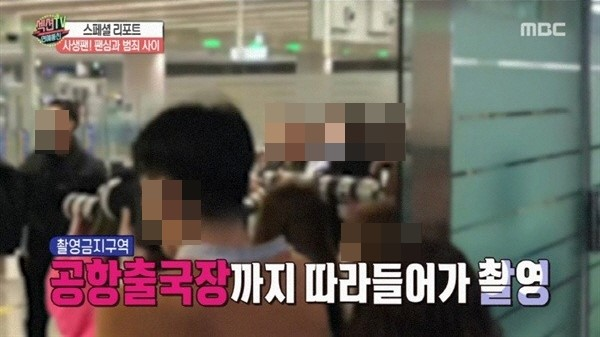 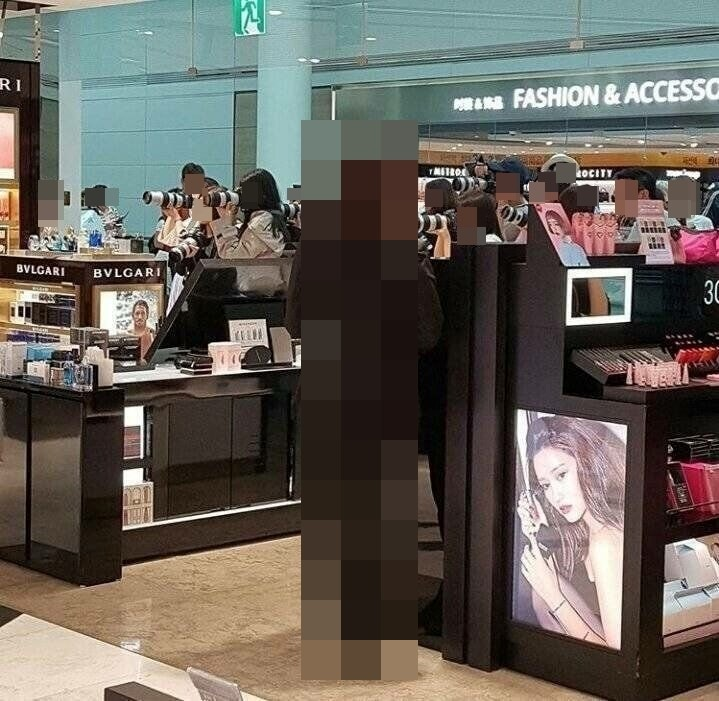 The reason why they’re not only being a pain to the artists and the staffs, but also to the fans while tailing the idols during their private schedules: 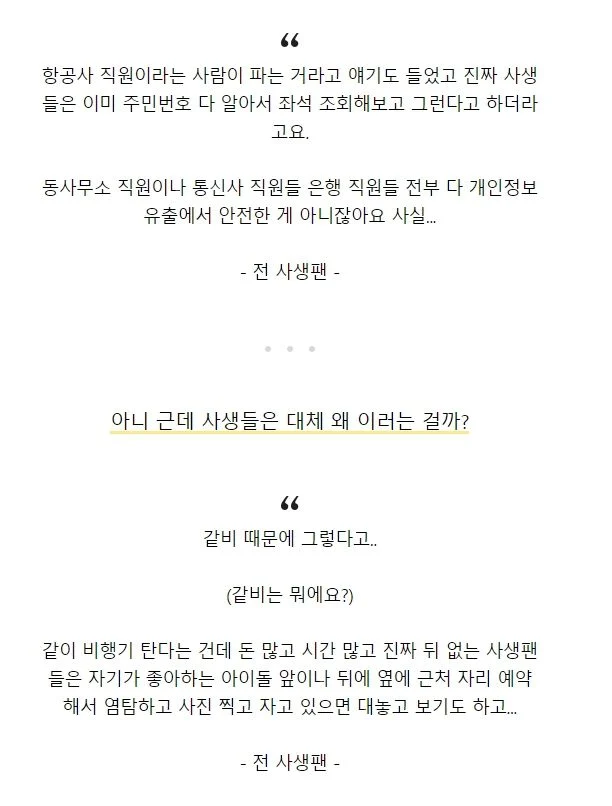 “I heard talks about an employee at the airport was selling the information. Sasaengs seriously already know all the [idols]’ citizenship number so they would just inquire them about the seat information.

The office employees, the press companies’ employees and the bank employees all leak their personal information. They can’t be safe anywhere actually…”

Q: No but why on Earth would sasaengs do somehting like that?

“It’s when we can take the plane (bihaengi) together (gachi) sasaengs are rich, they have so much time in their hands and they have nothing better to do. They would book a seat right in front, beside or next to the idols that they like and spy on them while taking pictures, they also watch them when they’re sleeping…” 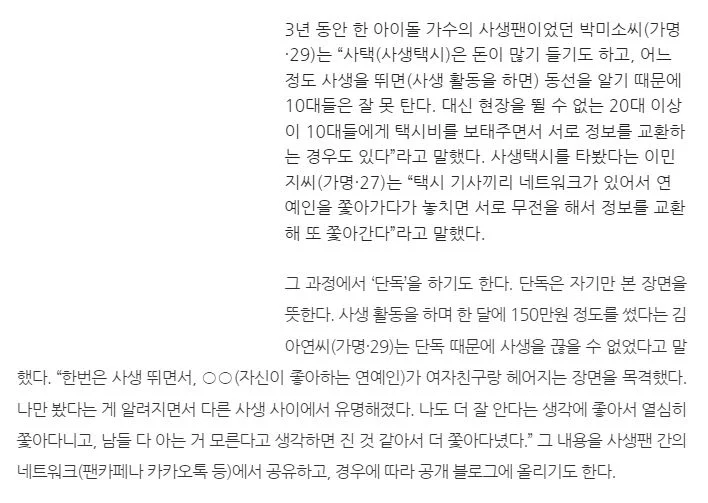 Park Miso (alias, 29 y’o) who used to be a sasaeng fan of an idol for 3 years said “Sa-taek (sasaeng taxi) can make a lot of money, it’s hard for teens to take taxis but if the sasaengs in their 20s can’t get to the site, they would expense the taxi fee for teenagers and they would share information with each other.”

Lee Minji (alias, 27 y’o who already rode on a sasaeng taxi said “Taxi drivers have their own network so if they’re following a celebrity and lose them, they would contact each other and share the information to follow them again.”

“Dandok (exclusive)” means an event only you are able to witness. Kim Ahyeon (alias, 29 y’o) spent 1.5Mwon/month (~1.15K USD). She mentioned that because of the ”dandok”, she wasn’t able to give up on the sasaeng life. “Once, in the midst of doing my sasaeng acts, I withnessed XX (celebrity’s name) break up with his girlfriend. I became famous among the sasaeng community for being the only one who witnessed it. Me too, I followed him because I got a feeling that I knew him more. Because I thought ‘I know something about him that others don’t’ which pushed me to follow him even more.” 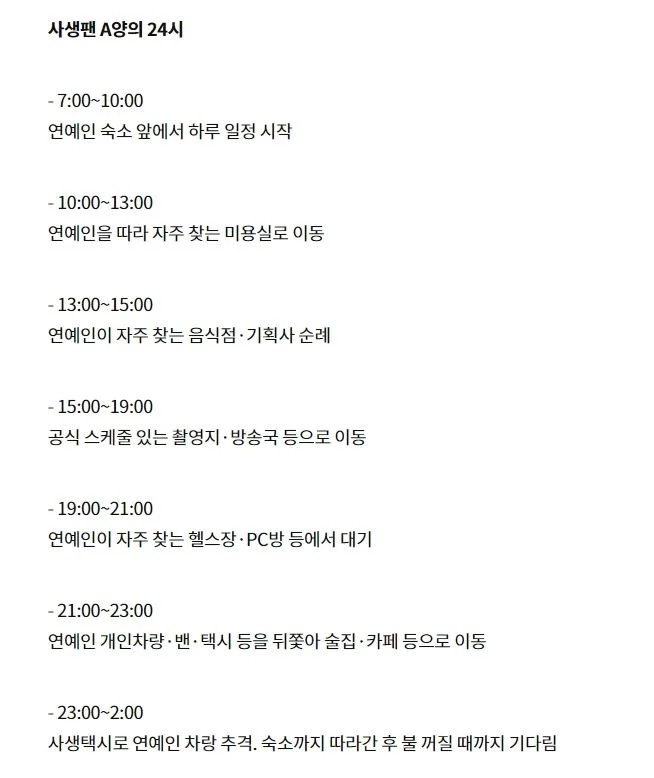 Move to the gym/PC bang that the celebrity often visits

Pursue the celebrity’s car through sasaeng taxi, after arriving to the dorm, wait there until they close their lights 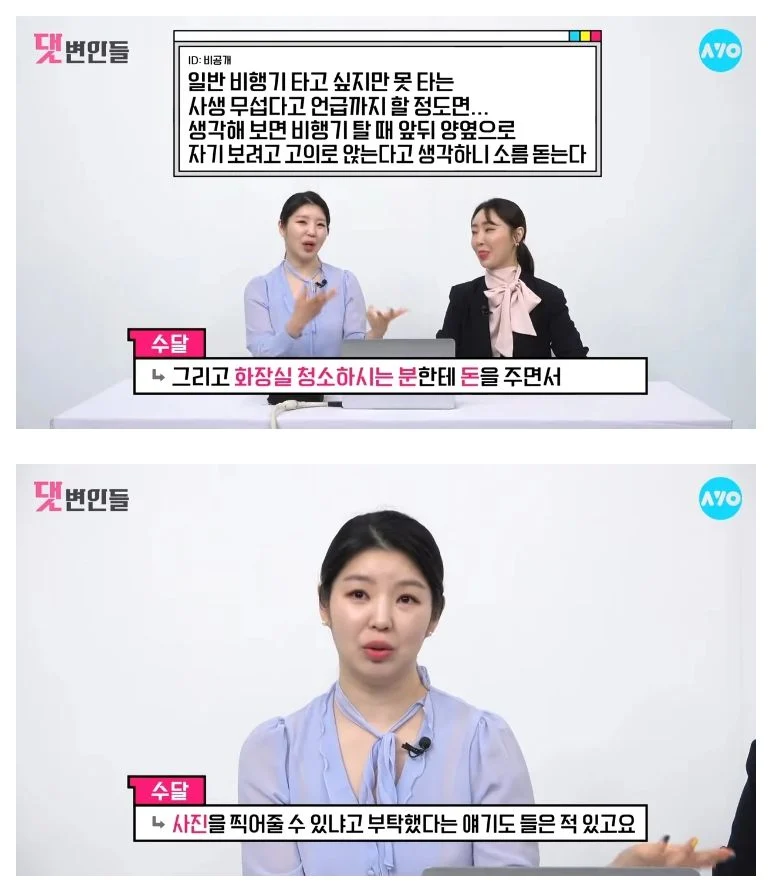 ID (anonymous): It’s so bad that (celebrities) want to take ‘normal’ airplanes too, but they can’t because they’re too scared of sasaengs…

If you think about it, doesn’t it give you chills to think that someone is intentionally watching you while you’re sitting on the plane from front/behind/side? 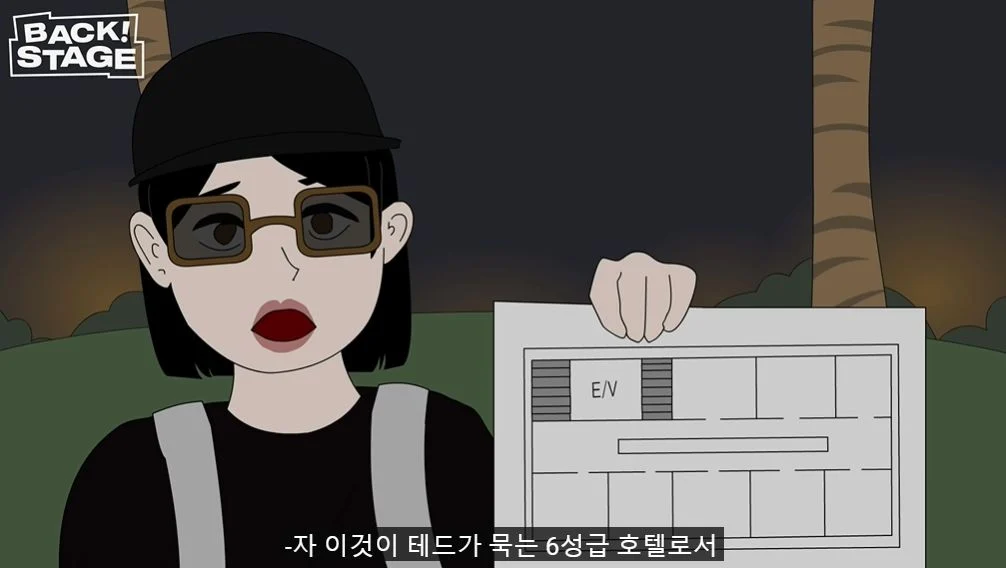 “Ok, this is the 6 stars hotel that Ted will stay at” 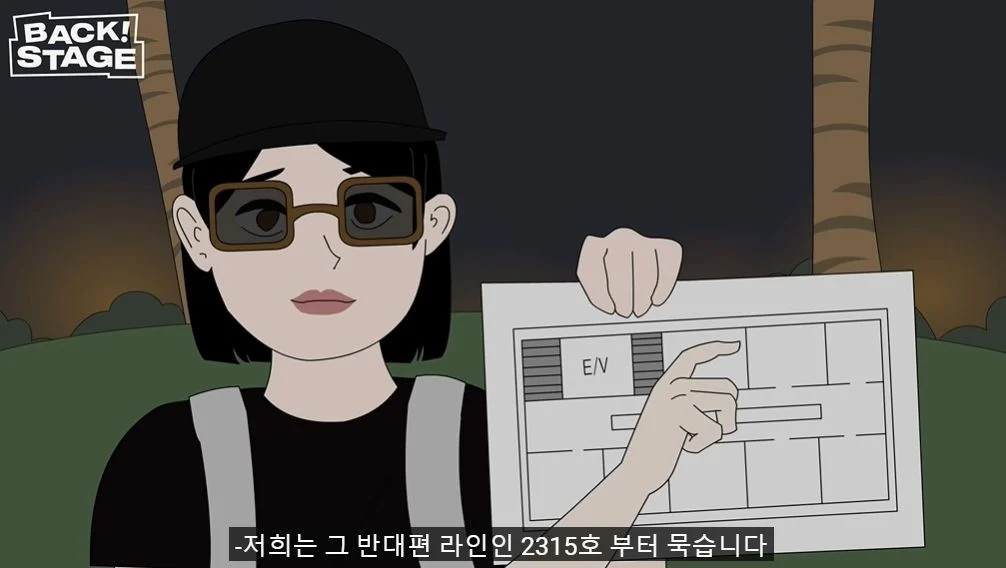 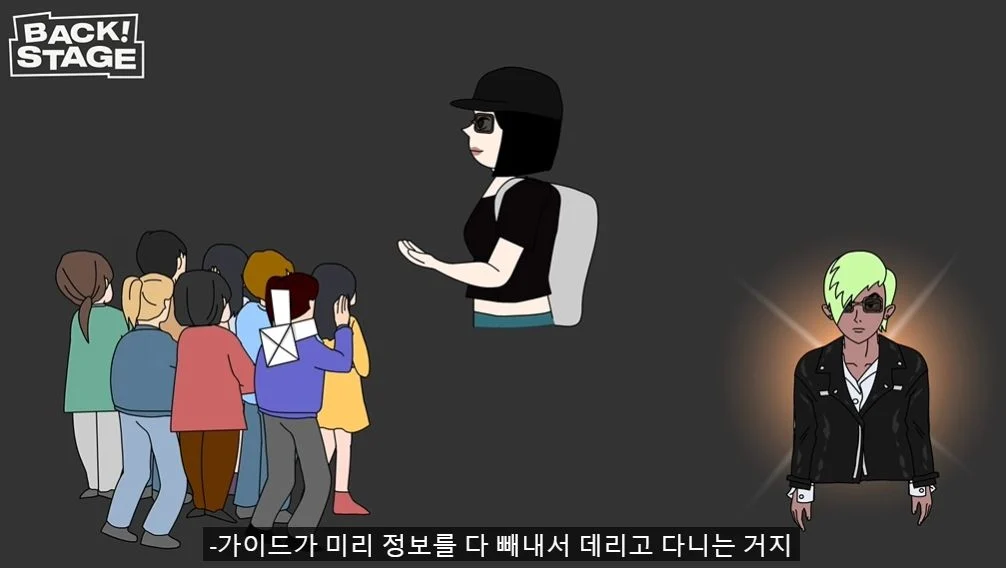 “The guide already squeezed out the information, that’s why they can being themselves there”

1. Because of those entertainment media lately, they would arrive 8 hours before the celebrities leave or arrive in the country and announce their live on Youtube. Once the live teaser is out on Youtube, people will already get all the information about when and how long they’ll be there on that day. It’s getting even more severe right now, so I hope they stopped doing those livesㅠ Even for kids who don’t know about it, because of the teaser, they can be f*cking drawn to do it too. Because of COVID, the airplane capacity is lowered, but nowadays, I see more people with phone cameras than fansites sticking to them… They’re always battling to see who can do more, both are problematic

2. Following them to fansigns and concerts is what normal fans can do, but if you follow them anywhere outside of that, you’re a sasaeng to me. The idols hate that themselves, you guys just look like stalkers

4. I used to work for a small company and I was taking the plane. Inside the plane, there were Korean sasaengs and Japanese sasaengs and they would follow them on the plane to take pictures. Because the plane was filled with sasaengs, the staffs all sat the members next to the windows and they had to change seats, but no matter what you do, they’ll find a way to get on that plane… Seriously they even drove me crazy. I believe that celebrities who have lots of sasaengs will all go nuts..

5. My bias’ fansites all do sasaeng actsㅋㅋ And whenever you try to swear at popular fansites, they always go “Since when?” “We didn’t take the same place” “We met by accident” and pretend like thatㅋㅋ following them to private schedules was just the basicsㅋ

6. They’re just attention seekers and mentally disturbed, first of all, you guys need to stop consuming their stuff

8. There are lots of agency employees who leak those information. There was a kid I knew who worked in the same company as them, someone requested them to share the personal information of the celebrity by inquiring the company, but that person said no, so they contacted another agency’s employee and after inquiring the information, they even asked the employee to take a picture of their road-viewㅋㅋ

9. I just saw sasaengs in front of the Gimpo airport this morning, they’re so strange…

10. There’s a kid who started being sasaeng when they were teens, now they’re in their 30s and they’re still a sasaeng