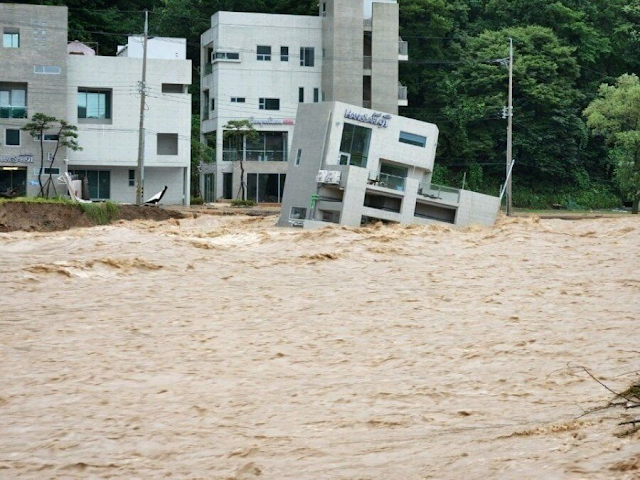 The upper picture is before the opening of the pool villa, and the lower picture is the current picture. It started operating in 2021. It’s the same building.

2. I hope nobody was inside…

3. I think that people escaped..

4. The ground was collapsing in other parts of Pohang

“Due to the Hinnamnor typhoon, there was a landslide in Buk-gu, Pohang It’s seriously a disaster”

5. This is way too dangerous…ㄷㄷ

8. What to do about the residents and landlords who were inside?ㅠㅠ

[teens stories] THE DAMAGES CAUSED BY THE TYPHOON IN BUSAN

We need to make a big fuss about disastersㅋㅋㅋ If they respond with complacency and that the damanges increase, they will be the first ones to curse at the National Weather Service and the government

The people who are saying that we are making a fuss about this.. they say that the place where they live at are intact, and that it’s fine as long as places affected directly by the typhoon are careful and that saying that this is a national threat is “making a fuss”.

Busan’s people opposed to increasing the height of the breakwater for beauty purposes so what do you want us to do about it?

To be honest, even if you were God, you wouldn’t be able to tell perfectly which area will be the most dangerous so how can we specifically pinpoint these areas? Even as someone who lives in Busan (Geumjung-gu), the wind this and the rain this time were weaker than the last typhoon. But how can anyone forecast this accurately? Also, It’s ok to make a fuss if nothing big happens. But if there’s actually a problem, then you would be in trouble

This breaks my heart…Even survivors spent 14 hours holding a pipe, thinking about their childrenㅜㅜ I hope that the people who passed away rest in peace..