t/n: *not* heavily paraphrased, we will stick to the main points 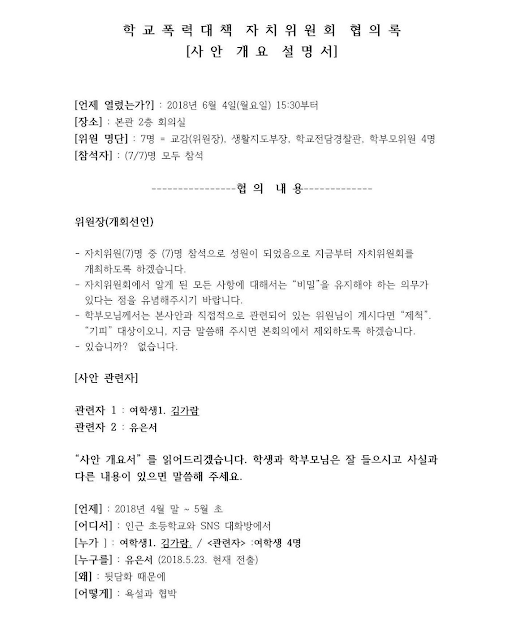 Minutes of the Self-Governing Committee on School Violence [Draft]

[Person related to the matter]

We will read the “Case Summary”. Students and parents, please listen carefully and tell us if there are any discrepancies.

[Where]: In a nearby elementary school and SNS chat room

[To Whom]: Yoo Eunseo

[Why]: Because of gossip

[How]: Profanity and threats 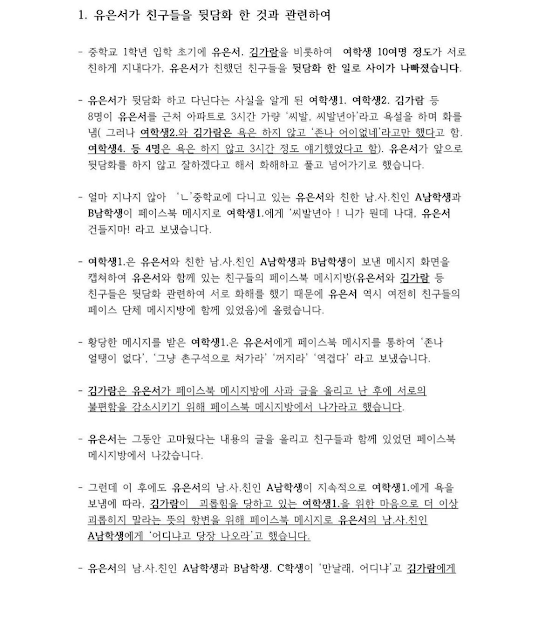 1. Concerning YES talking behind her friends

– At the beginning of middle school, 10 female students including YES, KGR used to be friends together, but because YES started talking behind them, the relationship deteriorated

– Female student 1 (FS1), Female student 2 (FS2) and KGR learned about the bad talks and among the, 8 of the students in the group went to a nearby apartment to swear  at her saying “F*ck that f*cking b*tch”. FS2 and KGR didn’t swear at her but said ‘It’s f*cking dumbfounding’. Female student 4 (FS4) and 4 other students didn’t sweat at her either. They talked for 3 hours. YES said that she wouldn’t talk behind them again and they resolved their conflict

– Not long after, B, male student who was closed with YES from N middle school wrote to FS1 along with another male student A on Facebook and told her through messenger “F*cking b*tch who do you think you are. Don’t touch YES”

– KGR said that after YES released her apology in the Facebook messenger, she didn’t want to feel uncomfortable with what happened so she also left the messenger room

– After that YES, A continued to swear at FS1. KGR seeing how FS1 was getting tormented and wanting to stop this, she sent a Facebook message to YES and A saying “Where are you? come out now” 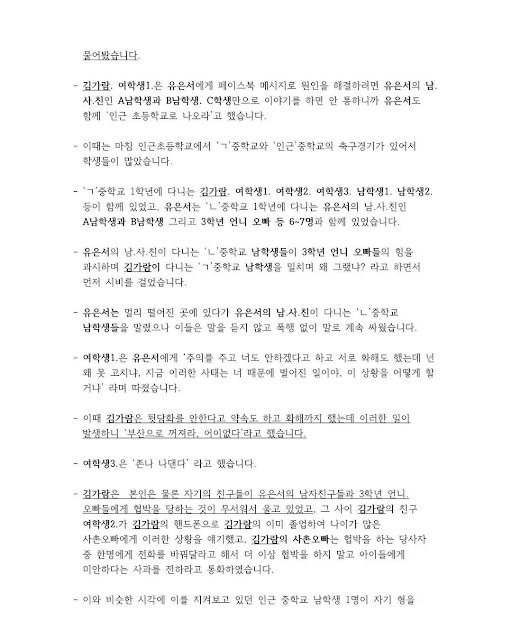 – YES, A, B and another student C said “Let’s meet. Where?” while replying to KGR

– KGR, FS1. YES, A and B all agreed to meet at middle school nearby to resolve it

– YES’s oppas from the 3rd grade displayed their strength by pushing KGR’s male friends and said “Why did you do this?” starting a quarrel

– FS1 told YES: you said you’d pay attention, that you wouldn’t start this again and we even resolved it, but why can’t you fix yourself? We arrived to this situation because of you. What are we supposed to do?

– KGR didn’t talk behind anyone’s back and kept her promise to keep peace but seeing this unravel in front of her she said “f*ck off to Busan. You’re dumbfounding”

– KGR was crying because she was scared about the unnies and oppas from the 3rd grade who were YES’ friends. At that moment, FS2 used KGR’s phone to call her older cousin who has graduated long time ago to come and menace them to stop this and to apologize 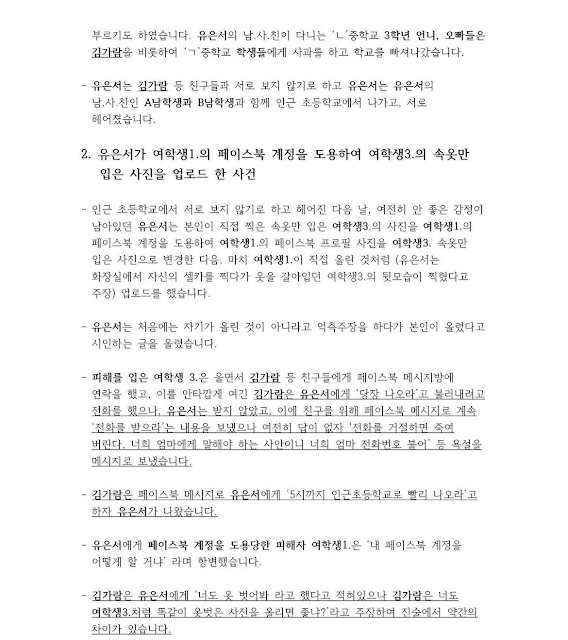 – In the end, YES’s male friend’s unnies and oppas from 3rd grade N middle school apologized to the students of G highschool including KGR and left the school

– YES and KGR’s friends didn’t talk to each other YES, A and B all left for other schools and they broke ties

2. Concerning YES stealing FS1’s Facebook account and taking a picture of FS3 in underwear and uploading it

– After they swore to not see each other again and broke ties, YES still had lingering feelings so she took a picture of FS3 in her underwear and stole FS1’s Facebook account and posted picture of FS3 as her Facebook profile picture as if FS1 released it herself

– YES first denied that she’s the one who released it, but in the end she acknowledged it

– FS3 cried and KGR with other friends contacted her feeling bad for her on Facebook message. KGR planned to call YES saying “Come out right now” but YES didn’t answer. She also sent FB messages to YES telling her to pick up but she didn’t. In the end she sent her a message saying “If you’re not picking up, I’ll kill you. I have something to tell your mom so should I just call your mom?”

– KGR sent YES another message with “I’ll give you until 5pm to the nearby middle school, come out fast” and YES appeared

– KGR said to YES “Would you like it if you were told to remove your clothes and Kim Garam was to release your picture like you did with FS3 online?” 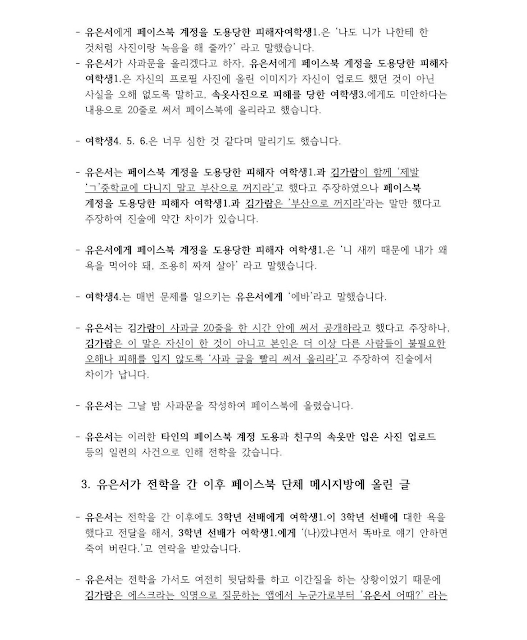 – YES said that she’d release an apology and resolve the misunderstanding about using FS1’s Facebook to post FS3’s picture. She also said she’d write a 20 lines apology towards FS3

– KGR told YES to hurry up with the apology

– YES wrote the apology that night and released it

3. Post that YES made in the group chat after transferring school

– Even after YES transferred school, she kept bad mouthing, because of this, in KGR’s Ask, an anonymous question app, KGR said “Yeah she’s f*cked up, she’s seriously annoying” when someone asked “What do you think of YES?” 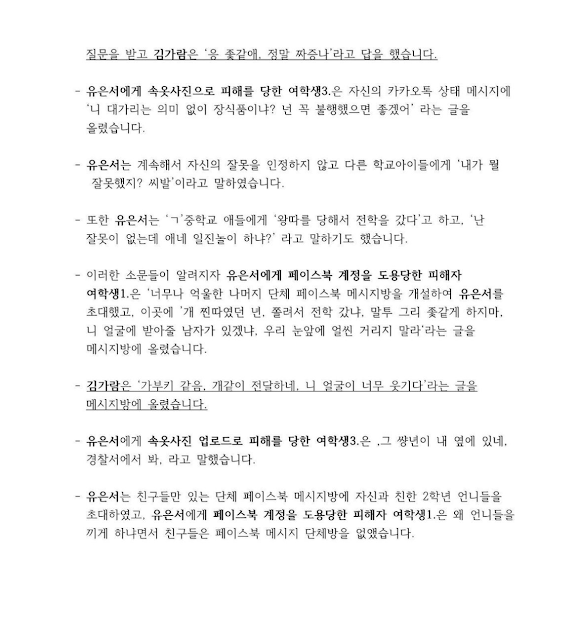 – FS3 also wrote in her Katalk message “Is your head just a decoration without any substance in it? I only wish you unhappiness”

– YES still denied what she did was wrong and said to other students “What did I do wrong? F*ck”

– Meanwhile, YES told other students from G middle school that “I got bullied so I transferred school, I didn’t do anything wrong, they’re the iljins”

– After the rumors started spreading, FS1 said “I felt like it was so unfair, so I opened a Facebook group message and invited YES. Over here, I told her “You f*cking jjin-da like b*tch (jjinda= big loser), are you a p*ssy for transferring school? Stop talking like a f*cker. There are no man who will like a face like yours. Don’t show yourself in front of us again”

– KGR said “You look like a Kabuki, your face is too funny”

– YES FS3 said “That b*tch is right next to me. See you at the police station”

– YES then invited a close unnies who were 2nd year in the group chat and FS1 said “Why are you taking your unnies in?” and removed the Facebook message. 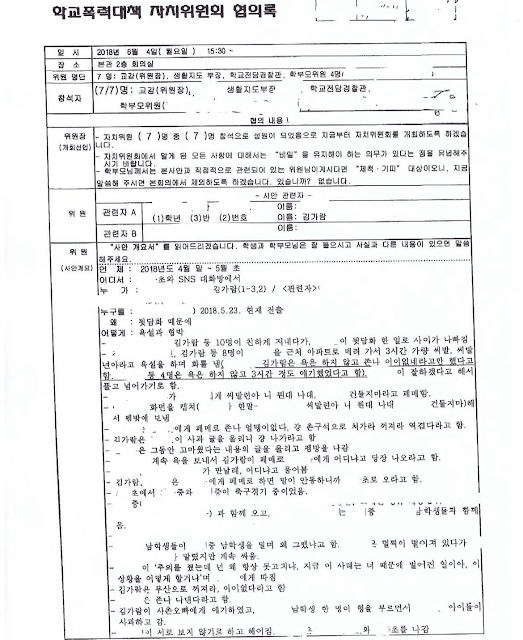 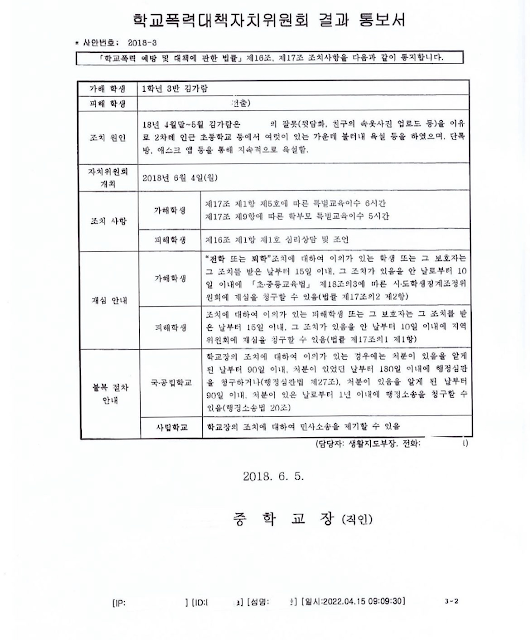 Cause: KGR bad mouthed & uploaded underwear pictures, etc., called a nearby middle school to swear at the students, also swore at people in the group chat & Ask app

Action to be taken:

1. But in the end, she was still slapped with the 5th disposition but now, she wants to claim everything was YES’ fault is that it?ㅋㅋ

2. But the way that this is written, it looks like it’s so one-sidedly siding with KGR..

Stuff like “YES still bad mouthed consistently even after transferring school” and “YES still didn’t acknowledge her fault and didn’t reflect”. Those statements aren’t objective statements at all. It just feels like trying to frame YES as the only assailant

> That’s right, and how did she end up with the 5th disposition in that case??

3. Can someone resume this?

> They were just a gang of iljins

> Of course the other party will have a different version

5. So you’re telling me that what she did on that chalkboard was something ‘normal students’ would do??

6. Who cares about the other party or whateverㅋㅋㅋㅋㅋㅋ The chalkboard and her Facebook pictures gave everything away alreadyㅋㅋㅋㅋㅋ

7. They’re just birds of a feather, where in the whole incident screams “normal student” to you?

9. Birds of a feather fighting between themselves, all I gathered is that she’s still not your average student

10. Why did Hybe not release this if it was that easy for them to do it? I’m curious

1. Is she claiming that she got that 5th disposition for nothing..?

2. Jjang Seraffim with OT5 is so nice😍 Our maknae Eunchae stands out so much and the formation is pretty too…

3. So she was an iljin? ㅋㅋ She’s fighting with people talksh*tting on her, fighting with the person who took a picture, etc. This isn’t some normal behavior. They were birds of a feather. But why is she talking about “I’ll work hard”? Didn’t they dissolve her contract and kicked her out? Seeing her statement, it seems like she wants to come out again, or did she already sign with another company? Looks like she’ll be either going solo, promote in a group or go in acting ㅋㅋ

5. I can understand why she feels it’s unfair

6. Ughㅋㅋㅋㅋㅋㅋㅋㅋㅋㅋㅋ So she was indeed a thug, please don’t come out againㅋㅋㅋㅋㅋㅋㅋ

8. But why is she revealing this now that she got kicked out? Does she want to be a celebrity again?

9. Her statement screams ‘I’ll work hard because I want to be a celebrity’ so is she thinking about coming out? First of all, she’s the one who ganged up 6 people against 1 in her group message to swear at YES, please if you have this kind of past, don’t think about becoming a celebrity

10. So random ㅋㅋㅋㅋㅋㅋ And the fact that she’s not reflecting is just daebak… ㅋㅋㅋㅋㅋㅋㅋㅋㅋㅋㅋㅋㅋ She’s totally an iljin;;; She’s there lying about “I’ve never fought with my friends, I never told them f*ck off ㅠ” Do you think that’s something a normal student would to? ;;

But does she think that releasing this would resolve anything ?????? I’m talking about that school violence report.. Isn’t this private matter?? You can see in the notice that there’s even a confidential agreement on itㅋㅋㅋ…