Do you dream of the distant East and in particular of this country that is nicknamed “The Land of the Morning Calm”? We have selected for you the 10 most beautiful places to visit in South Korea.

Located in the northeast of Asia, at the same latitude as South Japan, South Korea is situated on a peninsula, which it shares with its neighbor, North Korea. The partition between the two countries took place in 1953, at the end of the Korean War, which opposed the South, supported by the United Nations, and the North, supported by China and the USSR. However, the two halves have not concluded a peace treaty and are still officially at war, even if the conflict is latent. As a result, the Land of the Morning Calm can only be reached by sea or air.

Follow us to discover the most beautiful places to visit in South Korea. 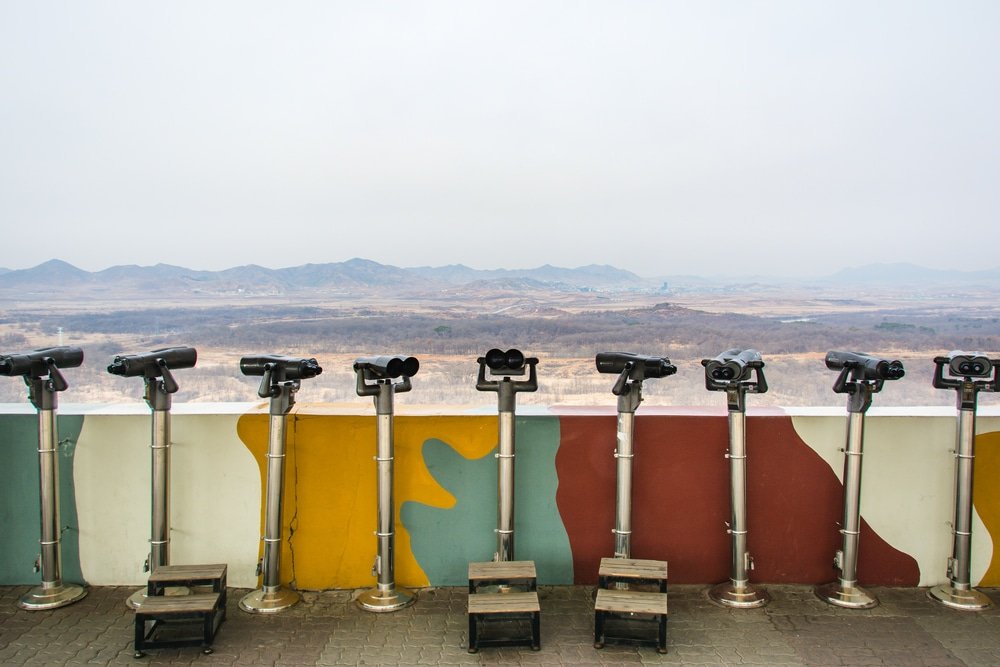 The demilitarized zone that separates the two countries for 235 km has become a tourist attraction, especially since this No Man’s Land has been colonized by a fauna and flora of great interest. However, it is only possible to access it through an organized tour, which will take you to visit the key points along the zone, without entering it.

From the observatories, you may have the chance to observe deer, which enjoy this natural environment. There is also a more comprehensive tour, which includes the JSA (Joint Security Area), managed by the UN and takes you inside the area. 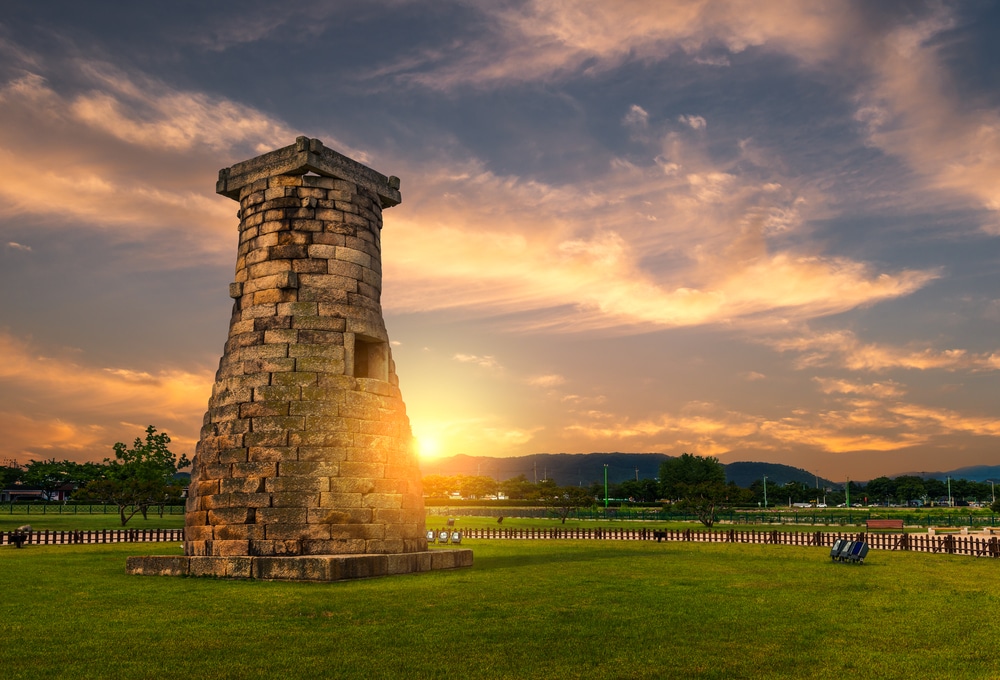 When visiting South Korea, it is important to know the broad outlines of its history. The charming city of Gyeongju, not far from the coast in the southeast, is perfect for soaking up Korean culture.

Gyeongju, which was the capital of the Silla Kingdom for 1,000 years between 57 BC and 935 AD, has preserved many relics of its glorious period. You can discover them during a walk in a green park, with nearly 200 tumuli, one of which has been cut out to house a small museum. A little further on, you can see one of the oldest astronomical observatories in the world, dating from the 7th century, then the Donggung Palace, on the edge of the Anapji pond. Go there at the end of the day to enjoy the illuminations at dusk. 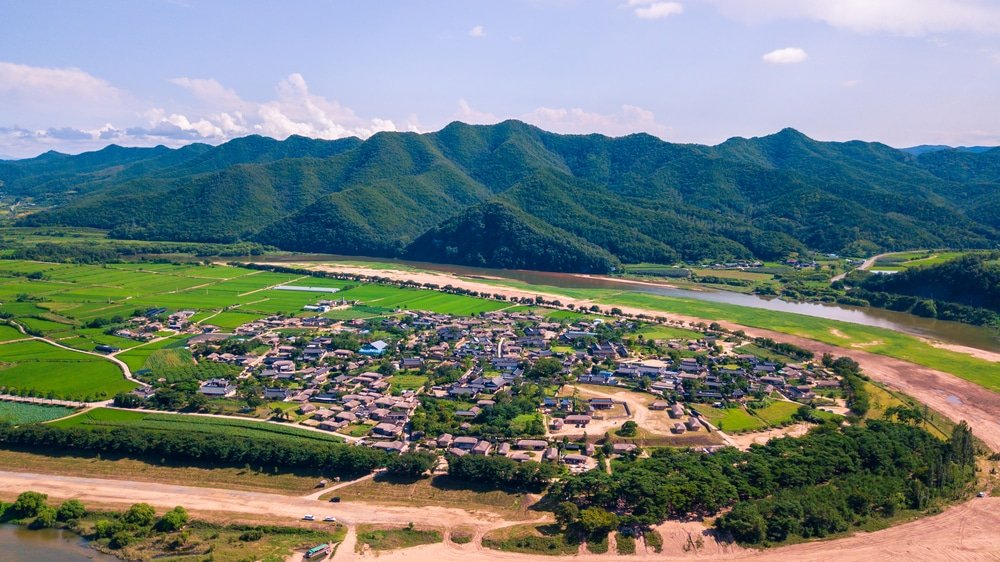 Another charming place to visit in South Korea is the town of Andong located in the central-east.

First, go to the top of Buyongdae cliff for a panoramic view of the village, and then continue to Hahoe, a historical village dating back to the 14th century and remaining as it was at that time. What a sight this village is, nestled inside a meandering river, surrounded by fields and mountains! In the spring and fall, it lights up with the colors of the flowers or the blushing leaves. Stroll through the narrow streets, enter the traditional houses still inhabited and enjoy colorful folklore parades. 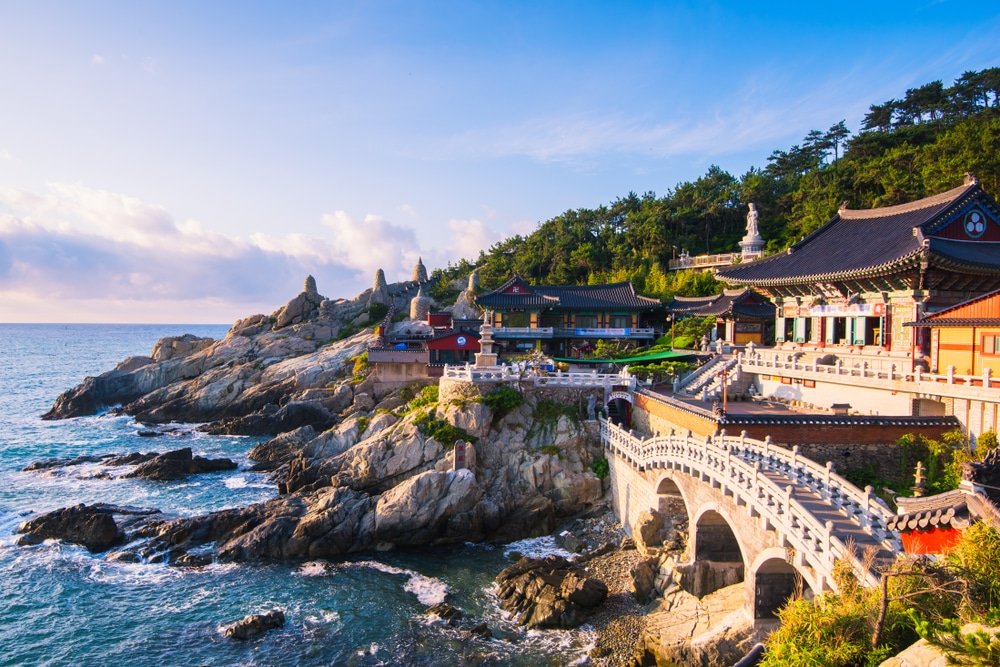 It is difficult to visit South Korea without visiting Busan, the second-largest city and important port. If the city is not globally attractive, it has at least two places that are worth a visit: Gamcheon, the cultural village, with narrow streets, which wind among brightly colored houses. The construction of this area dates back to the 1950s and everything has been designed so that each house has a clear view. There is a lot of street art here, including a statue of the Little Prince looking out over the city.

About 1 hour from Busan, you should absolutely hike on the coastal path of Igidae, between forest and jagged coast. The walk starts at a seabed observatory on the tiny Oryukdo Islands, then passes through a beautifully landscaped park on a former military site and then winds through the forest to end with a breathtaking view of the Gwangan Bridge. 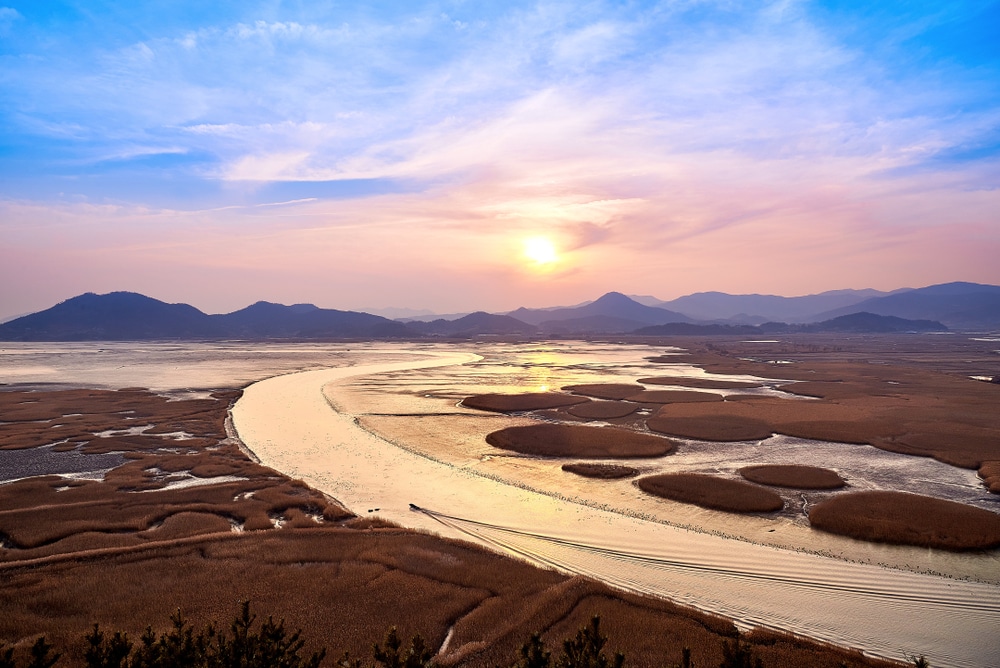 On the south coast, Suncheon shines with its botanical garden and ecological bay. After the 2013 International Garden Show, the huge botanical park retained many of the floral and landscape designs of the invited countries. This space was designed to represent the layout of the city, and from the top of one of the hills, the general view can be seen. The water area represents the urban area. As you pass by, admire the work of the gardeners, who pull out the weeds by hand…

At the end of the afternoon, take the monorail that leads to the bay, which is a protected natural park. A long walk in the biggest reedbed of the country will make you appreciate the calm of the place and enjoy the birds’ singing. At the end of the road, the sunset over the Yellow Sea will reward you for having walked here. 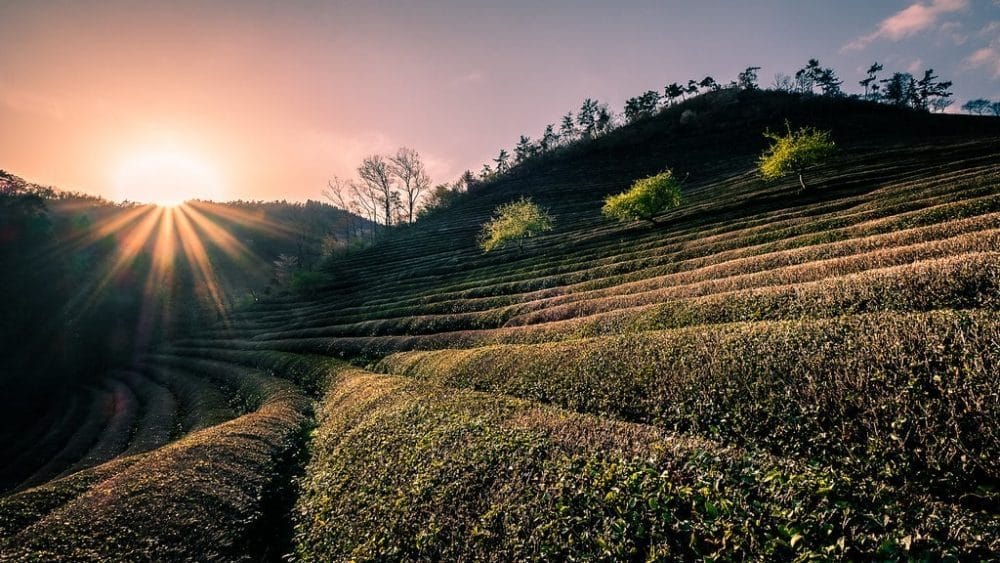 It is impossible to visit South Korea without getting to know one of the emblematic cultures of Asia! So let’s go to the tea fields in Boseong, about 1 hour from Suncheon. Here, it is not only your sight that will be awakened, but also your smell, with the delicious scent of the tea leaves, gently rocked by the breeze. You will be amazed by these green hilly landscapes, sometimes highlighted by light mists. It is not without reason that this region is often used as a backdrop for Korean films.

Many plantations are open to visitors and are a great place to walk among fields and hills. You will also have the opportunity to visit a tea museum and to taste local specialties, based on green tea, of course. 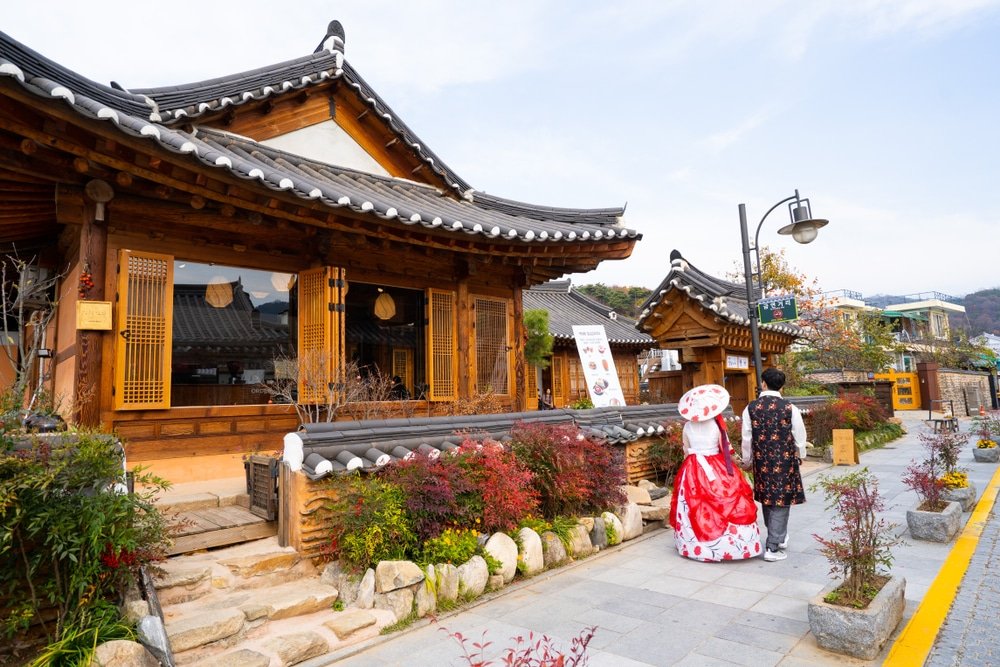 200 km southwest of the capital, Jeonju is a must-see. Plan a traditional accommodation (hanok) in the old town, you will feel transported back in time. Your bed will be the traditional futon, placed on the floor. You may need some explanations to install it properly, as you will find it folded, so as to free the space. This will be the occasion of a pleasant moment of sharing with your host.

In this preserved district, forbidden to cars during the day, you will wander between small traditional houses, historical buildings, museums – including the one of the art of calligraphy, and even a Catholic cathedral, founded by an Aveyronnais. Everywhere in the streets, you will be accompanied by young and not so young people wearing the traditional dress. You can also try it, they are for rent and it will allow you to enter the museums for free. The city is famous for its gastronomy (it is from here that the famous bibimbap comes from) everything here is gathered for the pleasure of the senses. 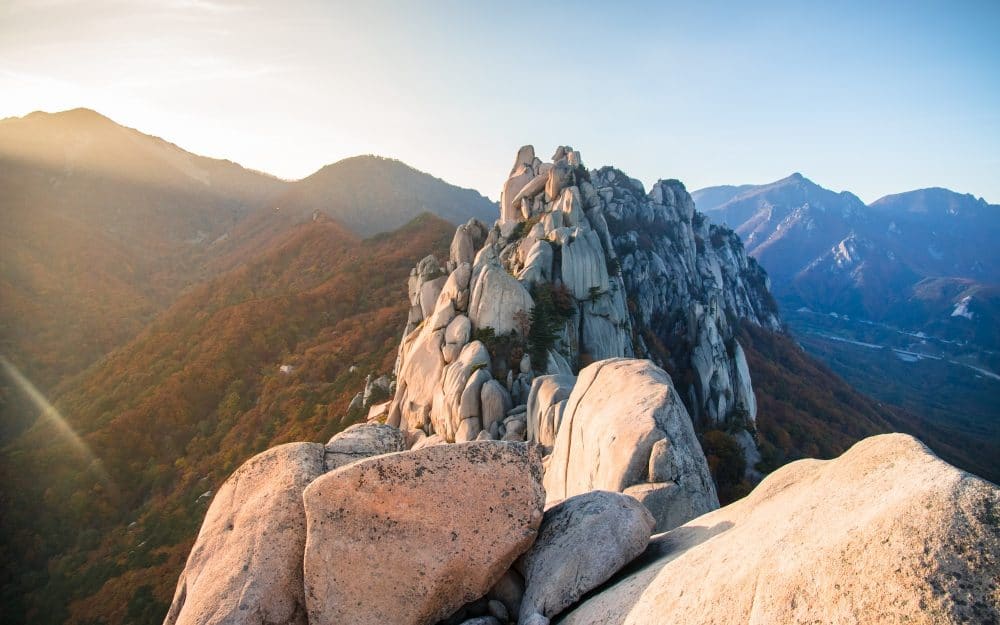 To the northeast, in the mountains that served as the setting for the 2018 Winter Olympics, is Seoraksan Park, considered the most beautiful in the country. Here, nature reigns supreme, as this park is protected. Choose one of the 15 hiking routes to discover the forest, the jagged rocks, the waterfalls or the temples that line it. Climb Ulsanbawi, a rock made up of six peaks, the highest of which is 950 meters.

The walk is a bit demanding, but you will be rewarded by the beautiful views of the surrounding valley. You can end the day at the beach of Sokcho, not far from there. 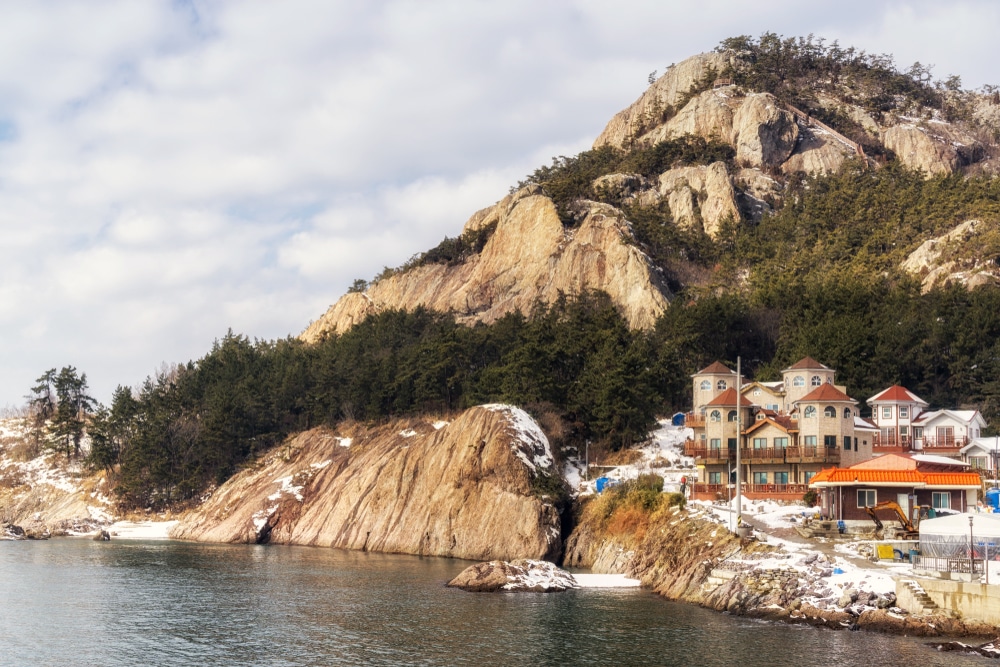 This beautiful chain of islands, 2 hours away from the capital, is an authentic and refreshing stopover after the hustle and bustle of the city. Accessible in one hour by ferry from the port of Gunsan, the small islands of Seonyudo, Munyeodo, Janjado, and Daejangdo can be visited quickly on foot, and are an opportunity to observe fishermen at work, natural creeks, as well as a curious endemic tree: the rain tree. The perfect opportunity to taste raw fish, prepared in front of you and to admire a magnificent sunset. It is best to arrive by the afternoon ferry, to arrive when the excursionists have just left! Be careful not to confuse it with Seonyudo Park in Seoul when planning your itinerary… 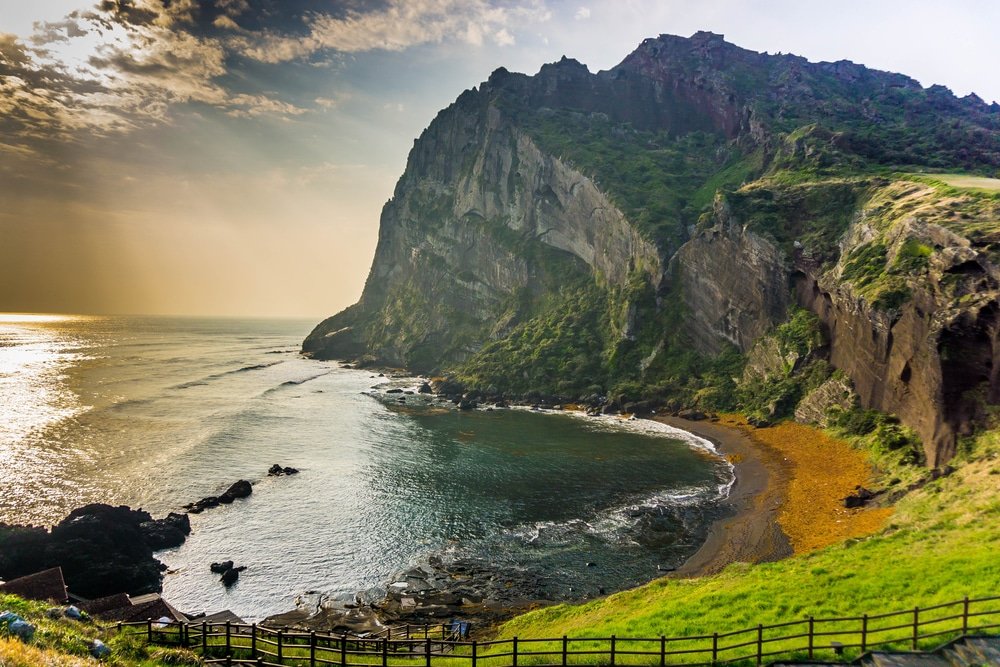 Jeju Island is a paradise destination and one of the must-see places in South Korea. It is located 85 km south of the peninsula. Formed by several volcanic eruptions, it offers beautiful landscapes, numerous hiking opportunities and the benefits of a subtropical climate. However, by climbing Mount Hallasan, which is 1950 meters high, you can also experience a subantarctic climate!

Another unusual experience on Jeju is the Manjanggul Cave, a UNESCO World Heritage Site. It is the longest lava cave in the world. 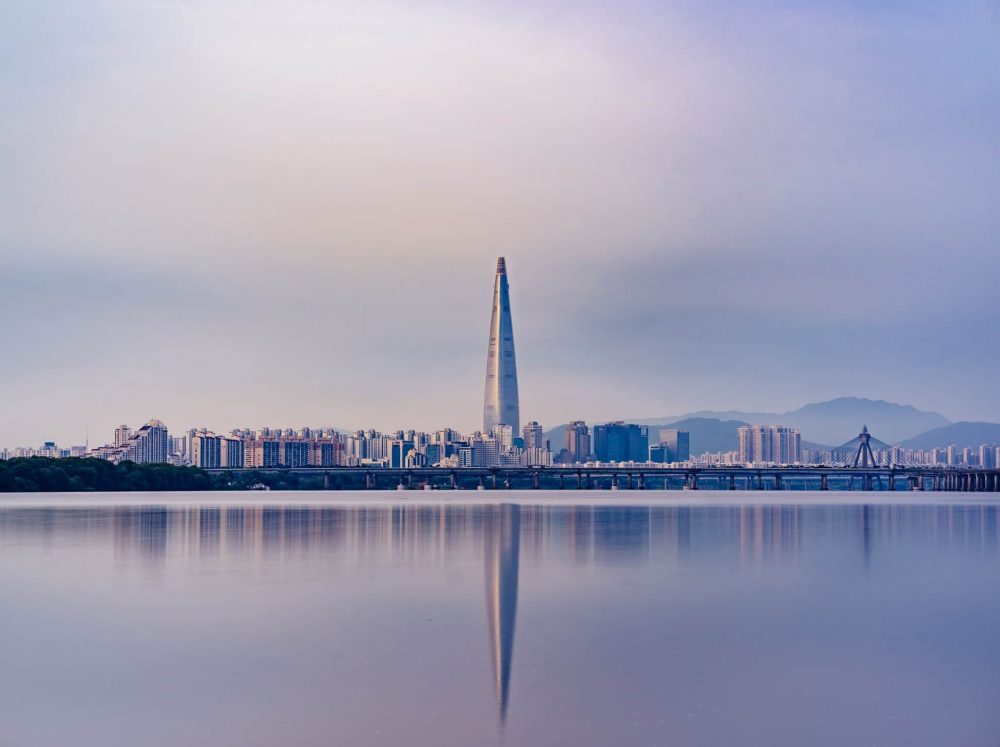 It is of course impossible to visit South Korea without discovering the charms of the capital, Seoul. The megalopolis may seem difficult to grasp at first sight, as it is so vast, but its center is easy to visit and includes many attractive districts. Royal palaces coexist with futuristic buildings and every street corner reveals new surprises.

The most popular and relaxing walk is along the banks of the Cheonggyecheon, a river that has been freed from its concrete straitjacket to give Seoulites a breath of fresh air. Not far from there, the pedestrian street of the traditional Insadong district allows you to admire the small shops and art galleries at your leisure.

Don’t forget to use a flight scanner to book a cheap airline ticket.