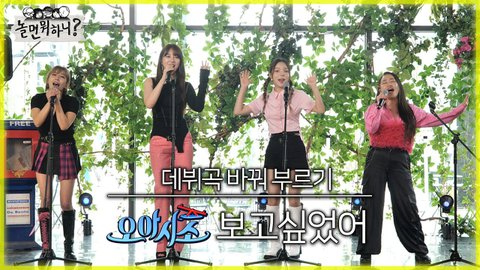 I thought that a woman’s height didn’t matter

But after watching Hangout With Yoo, I got freaking shocked…

Seeing them putting people who weren’t originally in the same team together like this,

you can see the difference in height in such an obvious way..

I realized that women’s height and proportions were f*cking important too..

I’m so annoyed since I’m short

Isn’t this obvious? Even for girls, they only look pretty when they are tall and have long legs

I’m in my 20’s and the more I get older, the more I see being tall as a good thing. When I was younger, the shorter kids were honestly more popular and I thought that they looked cuter. But the more I age and meet people dressing up in their casual clothes, I started naturally thinking that being tall was actually a good thing. I’m not only talking about the fit of clothes but being tall also gives you an aura, and people won’t mess with yo easily. Men also slowly started to view tall women as “women” in a charming way

F*ck… I’m short and reading these comments break my heartㅠ It’s true that being tall for a woman is a good thing… Shorter girls also envy tall girls ㅠㅠㅠㅠ f*ck. Just where are tall girls even getting hated? It’s only the short girls who are getting hate???ㅠㅠㅠㅠㅠㅠㅠㅠ

Yoon Eunhye is tall but Park Jin Joo is also 160 so I think that she looks fine. But Jo Hyun Ah’s profile says that she’s 153.. at her height, she’s indeed considered short…

[teens stories] NO BUT ISN’T PANN WAY TOO OBSESSED WITH HEIGHT?

In reality, nobody cares if you’re tall or short. Short kids also live just fine but Pann weirdly praises tall kids so much while dragging short kids. I’m also on the taller side but I seriously don’t understand this

I’m short and every time I see those kind of posts, I get freaking sad

For real, as soon as people start talking about height, people start worrying about short girls’ ability to get married, their genes and descendants and whatnot