“I don’t even know what’s so remarkably long about [her legs]. There are so many idosl with prettier proportions than her. Seeing how there’s only talks about Giselle’s legs length when it comes to her, it seems like Aespa’s fans has nothing else to praise her about aside from her legs length” 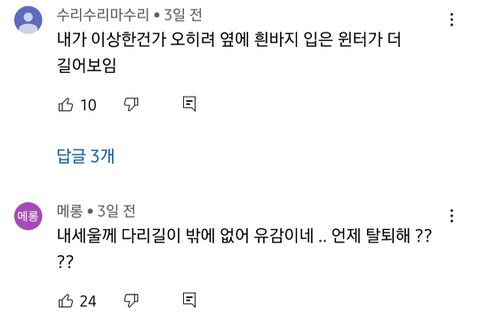 “Am I weird? Winter’s legs look longer than her even though she’s wearing those pants”

“I pity the fact that there’s nothing else to boast about her aside from her legs length.. When is she withdrawing????” “If I may say it coldly, there’s nothing outstanding about Giselle

There are so many prettier faces than Giselle spread around… And the trainees went through lengths of competitions just to debut, but she debuted through SM with that kind of skills, which makes no sense..

Her talents don’t stand out, and she has nothing remarkable either. Just looking at Giselle, she just looks like those extras standing in the crowd of a high teen movie’s party

I’m even impressed to see people shielding her.. I actually think that Giselle might’ve stole the spot of someone else who could’ve debuted”

I always think that kids like them will get their pay back if they open their mouths like thatㅋㅋ If people realize that they’re still not caught after leaving one or two comments that crossed the line , they’ll keep on writing even worse and worse comments. I really hope that they receive their payback harshly

Who do they think they are to be able to write these kinds of comments?ㅋㅋ Are they proud that they’re able to ‘justify’ the reason why they can leave hate comments? Everything will hit them back like a boomerang in the futureㅋㅋㅋㅋㅋㅋ

This comment straight up defines it ㅜ I don’t know since when personal attacks became a givenㅋㅋ Following their logic, if you’re a celebrity, you’re getting a job for others to see, so personal attacks should be a givenㅋㅋㅋㅋㅋ So are they supposed to bare with it their whole lives? Those kids impress me. Anyways Giselle is already in Aespa and she’s doing well so why are they like that? Do they not know how bad karma will hit if they act like that… 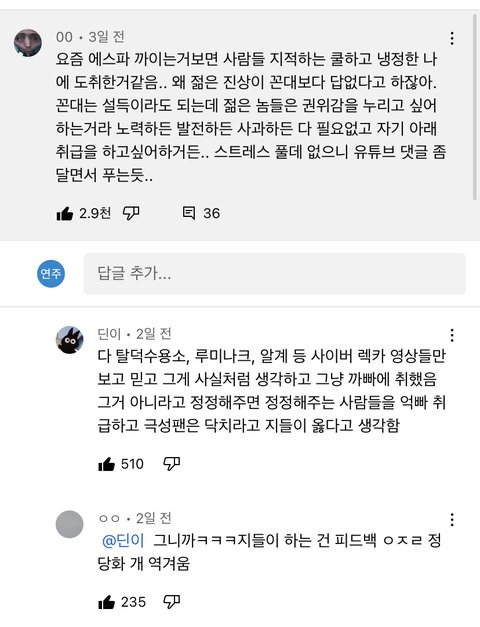 “Nowadays, looking at people bashing Aespa, it looks like they delude themselves thinking they’re cool for pointing their fingers… Why are the youths becoming even more hopeless than the kkondaes? (t/n: elder people who power trip) At least kkondaes can be convincing, but why are young brats so drunk on their sense of authority that no matter how much others make an effort, improve themselves and apologize, they still feel the need to treat others lower than them..? Looks like they have nowhere to relieve their stress, so they’re leaving Youtube comments to vent”

“They all take videos from Sojang, Luminark, eggs accounts, etc. as facts and are drunk in hate. And when people try to clarify to them that this isn’t the truth, they will treat those people as if they’re ‘extreme groupies’ to raise themselves

The words are indeed harsh, but I really hope the fans stop their worshipping of her legs