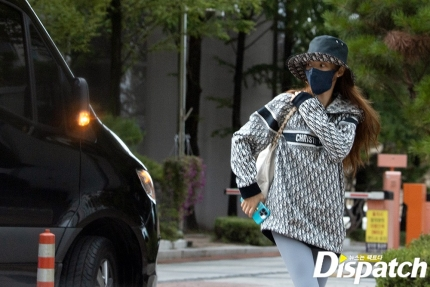 He has been arrested for fraud twice. Park Min Young’s exclusive contract with Namoo Actors ended on December 29, 2021, when she declared that she would be looking for a new agency. However, her declaration was merely a formality, as she had already decided on her new agency, HOOK Entertainment, where she signed an exclusive contract just one day later on December 30, 2021. HOOK Entertainment is a subsidiary of Chorokbaem Media, led by Won Young Shik. The company also has ties with Kang Jong Hyun. 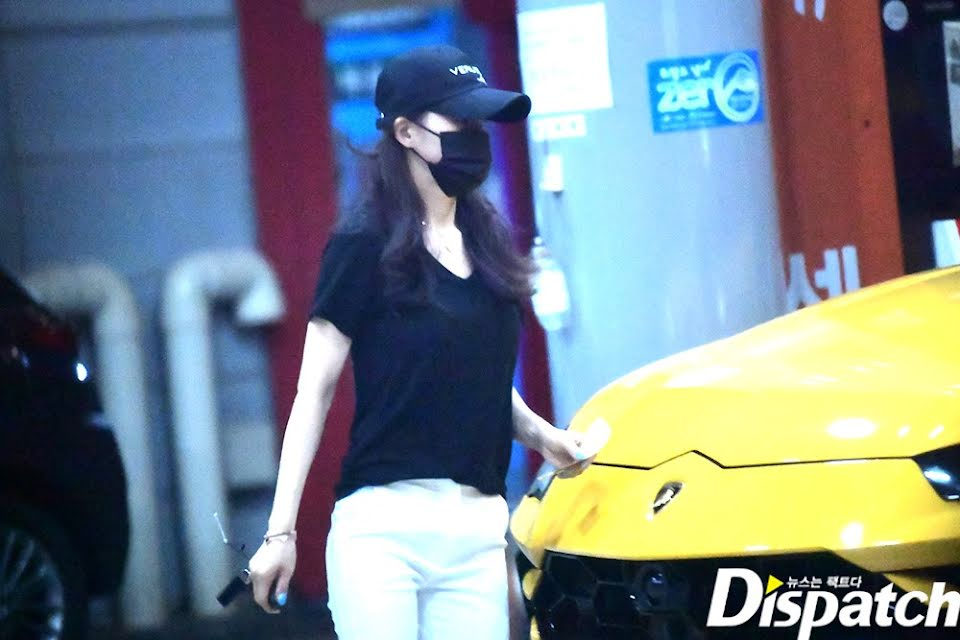 Dispatch provided a summary of the details prior to the lengthy article diving into Park Min Young and Kang Jong Hyun’s relationship and why he is a controversial figure. 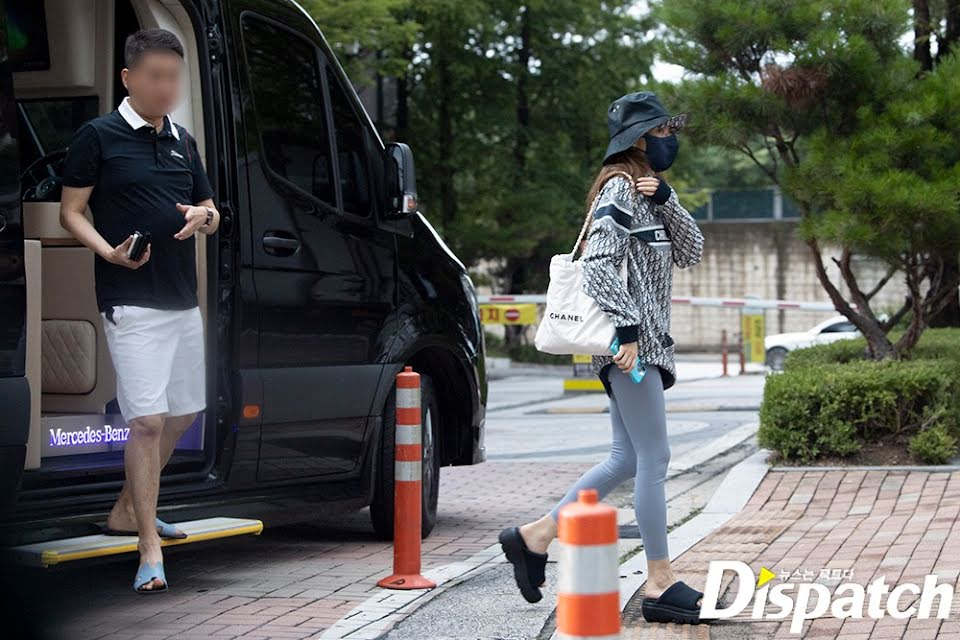 On August 3, 2022, there was no filming for Park Min Young’s current K-Drama Love in Contract as it was a rest day. As Park Min Young is heavily invested in managing her body, she went to a ballet academy on her day off.

Despite the temperature being 29 degrees Celsius, Park Min Young was covered head to toe in Dior, with a Dior bucket hat and anorak (waterproof jacket usually worn in colder regions).

Kang Jong Hyun also took a box from his assistant. The box contained a gift for his family. Both Kang Jong Hyun and Park Min Young then entered the apartment. On August 3, 8:25 pm, Park Min Young left the apartment. At the same time, Kang Jong Hyun’s mother also left to see Park Min Young off in person. The two seemed quite close, and shared a hug before saying goodbye.

Park Min Young and Kang Jong Hyun once again boarded the Mercedes Sprinter. This time, they headed off to Cheongdam-dong, where Park Min Young lives in a luxury villa with her parents.

Park Min Young left first to open the front entrance and called an elevator. Kang Jong Hyun followed, carrying another gift. Through the visits to the families, their relationship was acknowledged by both of them.

Who is Kang Jong Hyun? 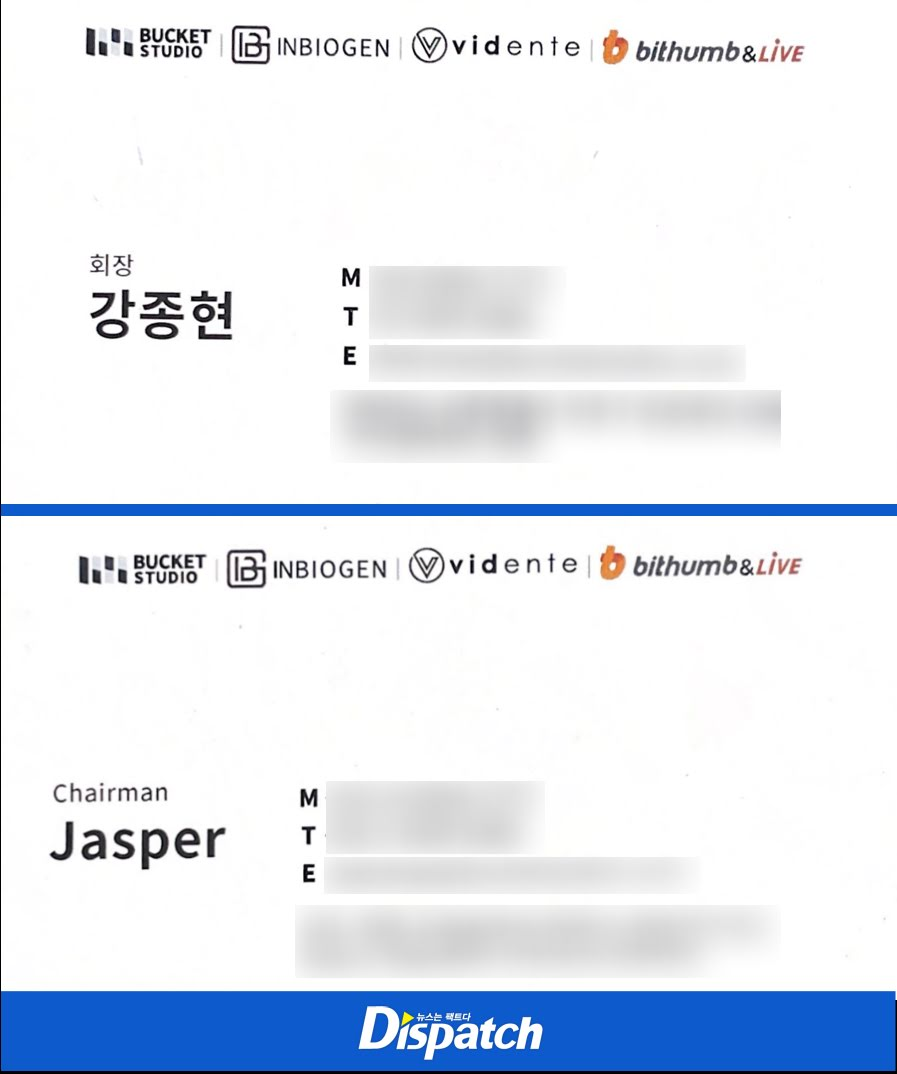 At this point, Dispatch realized that they were curious about Kang Jong Hyun. What charms did he have to captivate Park Min Young? Dispatch analyzed him over the span of two months.

Kang Jong Hyun holds business ties to multiple companies, including being the chairman for Vidente, Inbiogen, Bucket Studio, and Bithumb Live. Vidente and Bucket Studio are listed on KOSDAQ and Inbiogen is listed on KOSPI. Kang Jong Hyun is also called the hidden chairman of Bithumb itself as Vidente is the largest shareholder in Bithumb Holdings with over 34% stake.

However, Kang Jong Hyun is a very reclusive person for someone with such wealth. In this case, the meaning behind reclusive is that there is no information about him specifically relating to these companies.

Kang Jong Hyun almost exclusively operates under borrowed-name accounts. When Dispatch contacted Vidente and Inbiogen, they were hesitant with their answer.

“Kang Jong Hyun chairman? Who? There is only Kang Ji Yeon chairman here.”

So how did he accumulate his wealth?

Kang Jong Hyun – Chasing his past 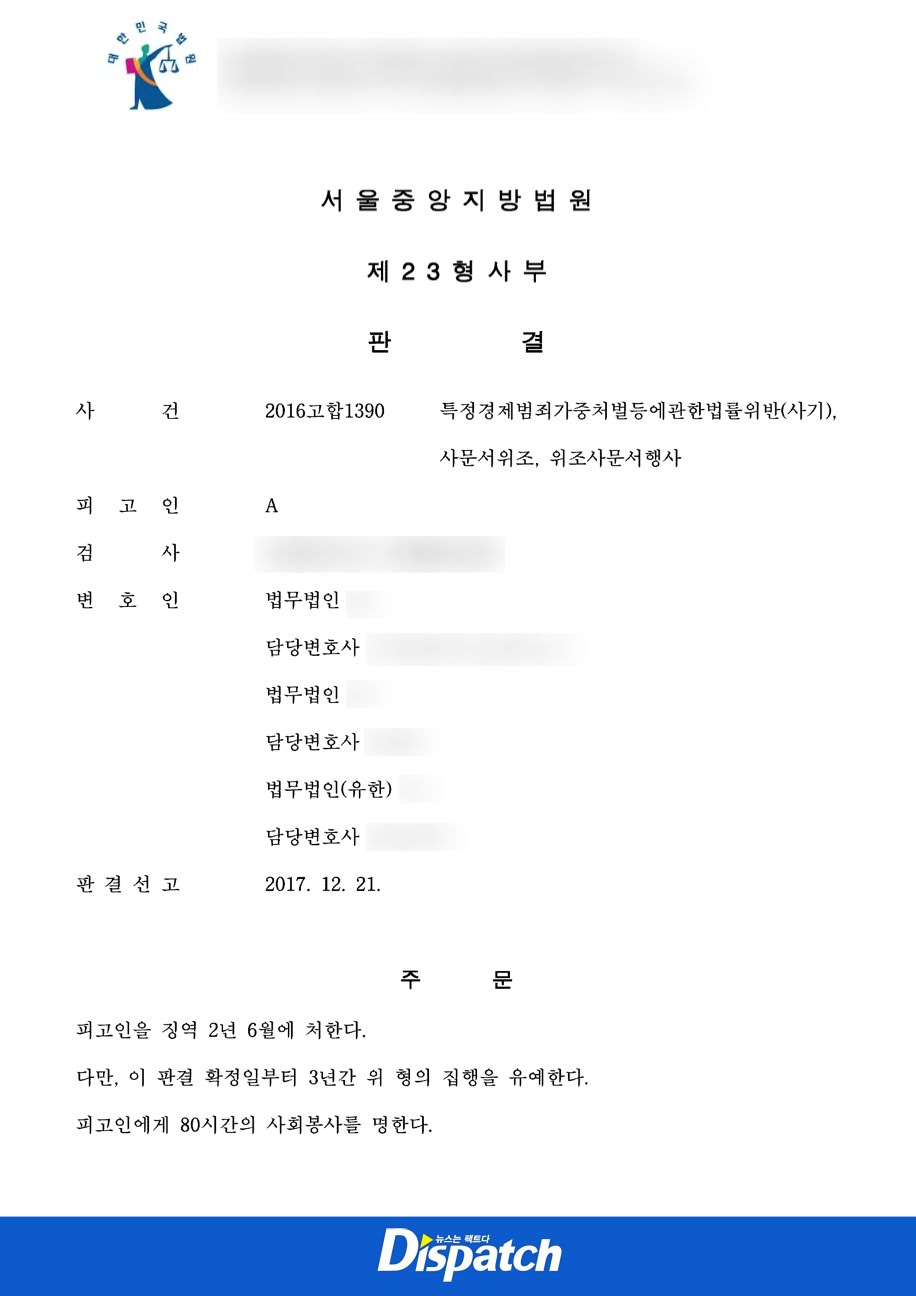 Kang Jong Hyun attended a university in Gangwon-do, but dropped out. In 2010, he started a mobile phone sales business with his father. They established D Olleh Communications in Gwangju.

D Olleh Communications was a company created with the purpose of selling mobile phones. Kang Jong Hyun also operated a branch of KT mobile and supplied mobile phones to other phone stores.

Between 2013 and 2014, Kang Jong Hyun was involved in a fraud case, defrauding about ₩3.50 billion KRW (about $2.45 million USD) from A Capital Group by altering the ledgers. He was charged with fraud and forgery of private documents.

The Seoul Central District Court found Kang Jong Hyun guilty for fraud and sentenced him to three years probation with two and a half years in prison should he violate probation. He was also ordered to complete 80 hours of community service.

Take the Money and Run

The events from 2013 to 2015 have been outlined now. Kang Jong Hyun made money by selling mobile phones, borrowing money, and defrauding others of money. At the same time, he was involved in a loan scheme with a financial company.

In 2016, Kang Jong Hyun was booked for fraud and sentenced to prison. The financial company he was involved with urged him to pay back his debts, but he did not make an effort to.

One reason why Dispatch took an interest in Kang Jong Hyun is that he suddenly appeared out of nowhere in 2020, grabbing three KOSDAQ listed companies and Bithumb.

A fairly complex story now unfolds, but one question tops them all. How did Kang Jong Hyun raise ₩23.0 billion KRW (about $16.1 million USD)? How did he get these funds? 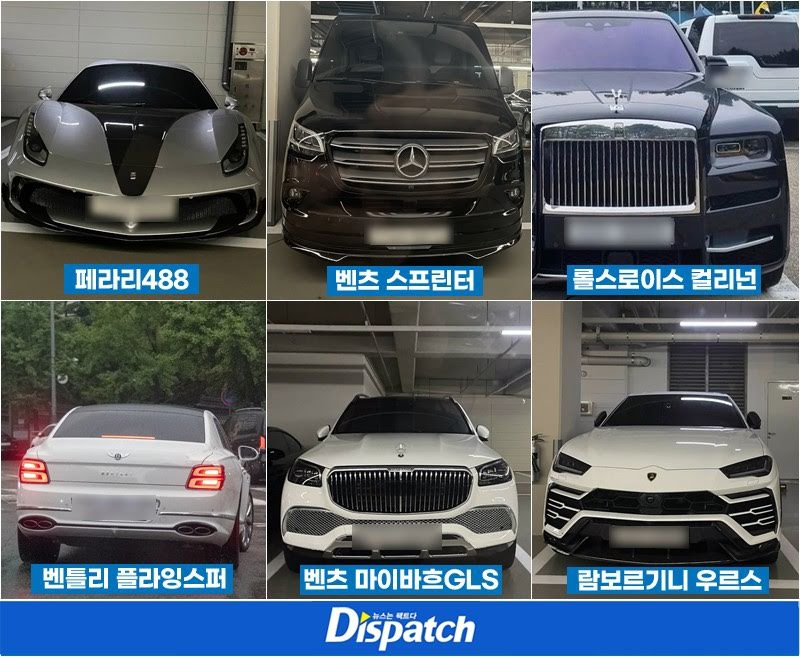 In August 2020, the company Initial appeared in the M&A market. The owner of Initial is Kang Ji Yeon, Kang Jong Hyun’s sister. She has a 100% stake in the company, and Dispatch claimed it was a paper company.

Initial’s first work was to acquire a stake in Bit Galaxia 1 Investment Association. With “only” ₩23.0 billion KRW (about $16.1 million USD), they were able to acquire Vidente, Inbiogen, and Bucket Studio.

Kang Ji Yeon was born in 1984 and her career focuses in as the CEO of a company called IT Mart. It is a company that supplied mobile phone accessories to coffee shops and other stores.

First of all, Kang Jong Hyun was a VVVIP at a Gangnam club in 2018. While the source of the money is unknown, he was the kind of person that would spend ₩100 million KRW (about $70,100 USD) on champagne in one night.

Dispatch was able to find Kang Jong Hyun on two Instagram accounts, where he was also known as #Jasper. In April 2018, he spent ₩100 million KRW (about $70,100 USD) on champagne for his birthday party.

Those four years won’t go away The last time Kang Jong Hyun had something on his track record was 2016, after which he disappeared after defrauding two companies out of a total of ₩15.0 billion KRW (about $10.5 million USD). Dispatch met with three anonymous informants about this four year gap between his fraud case and his reappearance with Bithumb.

“It’s true that he did not pay the money back. I heard he exchanged his credit for the debt. He hid behind his sister and had her as the face instead.”

“He has been in and out of Thailand since 2016. He said he was running a resort business, but I couldn’t confirm anything.”

“Kang Jong Hyun was close to a group of gangsters in Seongnam. He did something in Pattaya, Thailand, but saying anything more will be difficult for me.”

Dispatch then got into contact with a businessman that has ties to the aforementioned Seongnam gang, who confirmed that he knows Kang Jong Hyun very well, but refused to elaborate on what happened in Thailand.

What Kang Jong Hyun should reveal

Buying stake in companies using money that was meant to be returned to the companies he defrauded is a legal problem. If an individual intentionally declares bankruptcy without attempting to repay their debts, there is a legal case for fraud or evasion.

He says he hit it big in Thailand but then if that is true, he needs to explain why he is hiding behind his sister. He is considered the chairman of his companies, but his employees don’t even know his name.

On July 23, 2022, a Bloomberg article was published stating that FTX, a digital asset exchange based in the United States, was looking to acquire Bithumb. Thanks to this news, Bithumb’s stock value increased by 29.77%. Yet Kang Ji Yeon was providing stocks to those close to her for far less than market value.

Love is beautiful, everything else is suspicious

Park Min Young is in love with Kang Jong Hyun. Their relationship in itself is beautiful. However, looking into Kang Jong Hyun, he himself has suspicions tied to him. Kang Jong Hyun was asked about some of these suspicions and some of his answers contradicted Dispatch’s article

Park Min Young’s agency was asked about the dating report and stated that since Park Min Young is currently filming her drama, their response will be delayed.

1. Ah I used to like Park Minyoung so much but thisㅠㅠ

2. Wow what Dispatch did this time is actually a good thing

3. She’s already so rich herself, but seeing how she still chooses to date someone like that shows that she really values money a lot. Thanks to this article, her image is completely washed out now. She should’ve just stayed content with her own money…

5. The timing that this got exposed is kinda suspicious, but she indeed deserves criticism. The more you digg stuff like that, the more you’ll see how rotten the social ladder is ㅋ

6. There’s a reason why we never found out more about the Burning Sun

7. This straight up shows why we never got a conclusion on Burning Sunㅋㅋ Everyone in the society at large are part of the spider web, seriously they’re so disgusting, I just want all of them to die off

8. Wow Dispatch really did a good work this time ㄷㄷ

10. Wow as expected, reality is even worse than movies

11. Seeing how she’s dating such a scammer makes me realize that birds of a feather flock together. There’s practically no chance tha she didn’t know about it

12. Park Minyoung is considered a top actress, she’s earning so much money so just why in the world would she date such a man? What’s the reason she fell for him? Aside from his money, I don’t think he has anothing else to show. Seriously there’s no end to people’s greed for money

13. He rally did everything that was deemed wrong… How can you date someone so foolishly?

14. Dispatch-yah you should stick to writing stuff like that instead of dating rumors. Go catch all the criminals

15. The Seongnam mafia has something to do with this too…. Hul

16. If he’s in Thailand, it means that he’s probably into drugs business…

17. Park Minyoung definitely knew what was happening and still decided to date him. She’s way smarter than people like us, stop thinking celebrities are easy

18. Thailand? So drugs…? What other case are connected to drugs dealership? Burning Sun?

19. Just how far does Burning Sun extend to?

20. Burning Sun’s arena…. This is the root of the evil in our society. There’s nowhere that’s not related to this ring