Skip to content
Home Netizen [Netizen] JUNG CHAEYEON FRACTURED CLAVICLE + CONCUSSION
What to do…. They said that she fell from the stairs 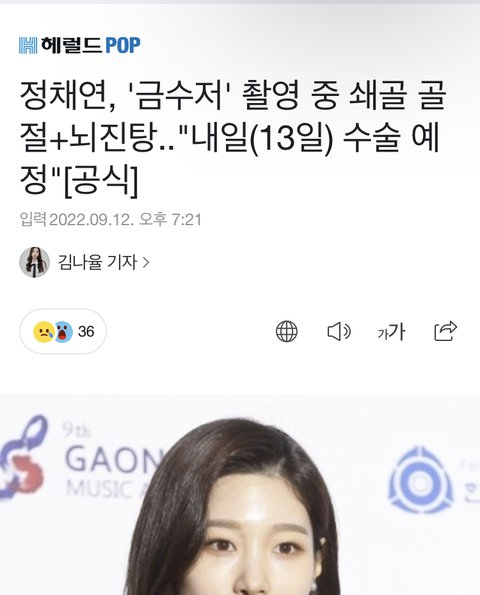 DIA’s Jung Chaeyeon will be undergoing surgery after sustaining a collarbone injury on the set of her upcoming drama “The Golden Spoon.”

On September 12, DIA’s agency MBK Entertainment announced that while filming “The Golden Spoon” in the early morning of September 10, Jung Chaeyeon fell on the stairs and was transferred to a hospital in Seoul.

They added, “After being transferred to a hospital and getting a CT scan and an X-ray, Jung Chaeyeon was diagnosed with a collarbone fracture and showed symptoms of a concussion, and received emergency treatment.”

On September 13, Jung Chaeyeon will undergo surgery for her fractured collarbone where they will check for ligament damage. If there is damage, she will also need surgical sutures.

Later this week, DIA will release their new single “Rooting For You” on September 14 while MBC’s “The Golden Spoon” premieres on September 23.

If you have a fractured clavicle, you won’t be able to turn to your side or run well and you need to wear a cast. It takes f*cking long to heal… What to do

There’ not that much filming left too, this is so upsetting, what to do… She has so many f*cking schedules for her ads too. Please get better soon

Tomorrow is DIA’s 3rd year anniversary and this will be the last comeback before contract renewal, what is happening?

She came on the fancafe to say that she’s fine. I hope she’s really fine 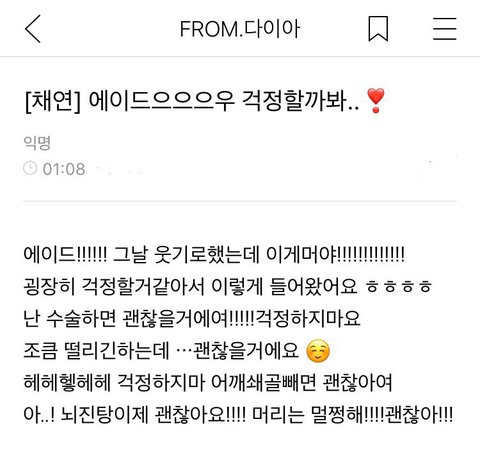 “Aideeeeuuuhhhhh you guys must be worried..”

Hehehehehe don’t worry, fractured clavicle is fine as long as I remove it