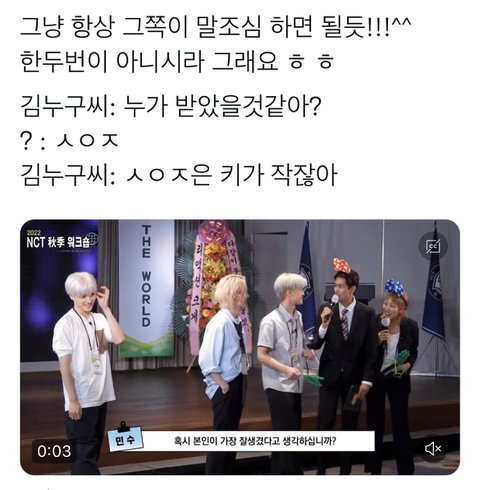 “All he needs to do is to keep paying attention to what he says!!!^^

This is not the first or second time it happens

DY: Who do you think would receive it?

DY: But Xiaojun is short no?

Look at him talking behind someone’s back again…

And NCTzens will shield him saying they’re close and whatnotㅋㅋㅋㅋ

Since when is Xiaojun close to Doyoungㅠ

No but why would he bring up the “he’s short” randomly like that?ㅋㅋ The fact that he’s saying this when talking to another member with a low voice is seriously dislikable

If you know the context before and after, you will not be able to shield this no?? They were picking NCT’s most handsome person and this is how he reacted. Someone at the table said that Xiaojun was the most handsome and he replied ‘but Xiaojun is short’ why would you do that to a fellow member…

What’s the reason behind having cameras and mics on when he still behaves like that. He’s acting like like that and earning money in front of the Dingo staffs but the way he talks is a turn offㅋㅋㅋㅋㅋ This isn’t the first time he’s doing it? Whether he treats them well in real life or not, he’s just someone who’s careless with words in general

Is he seriously never going to correct himself? He just never really got into a controversy

At that time, he was acting as if he suffered so much and that the new members should be grateful towards him because they joined laterㅋㅋㅋ Sungchan was also laughing at first and then his expression got spoilt

“Do you even know how much we suffered???”