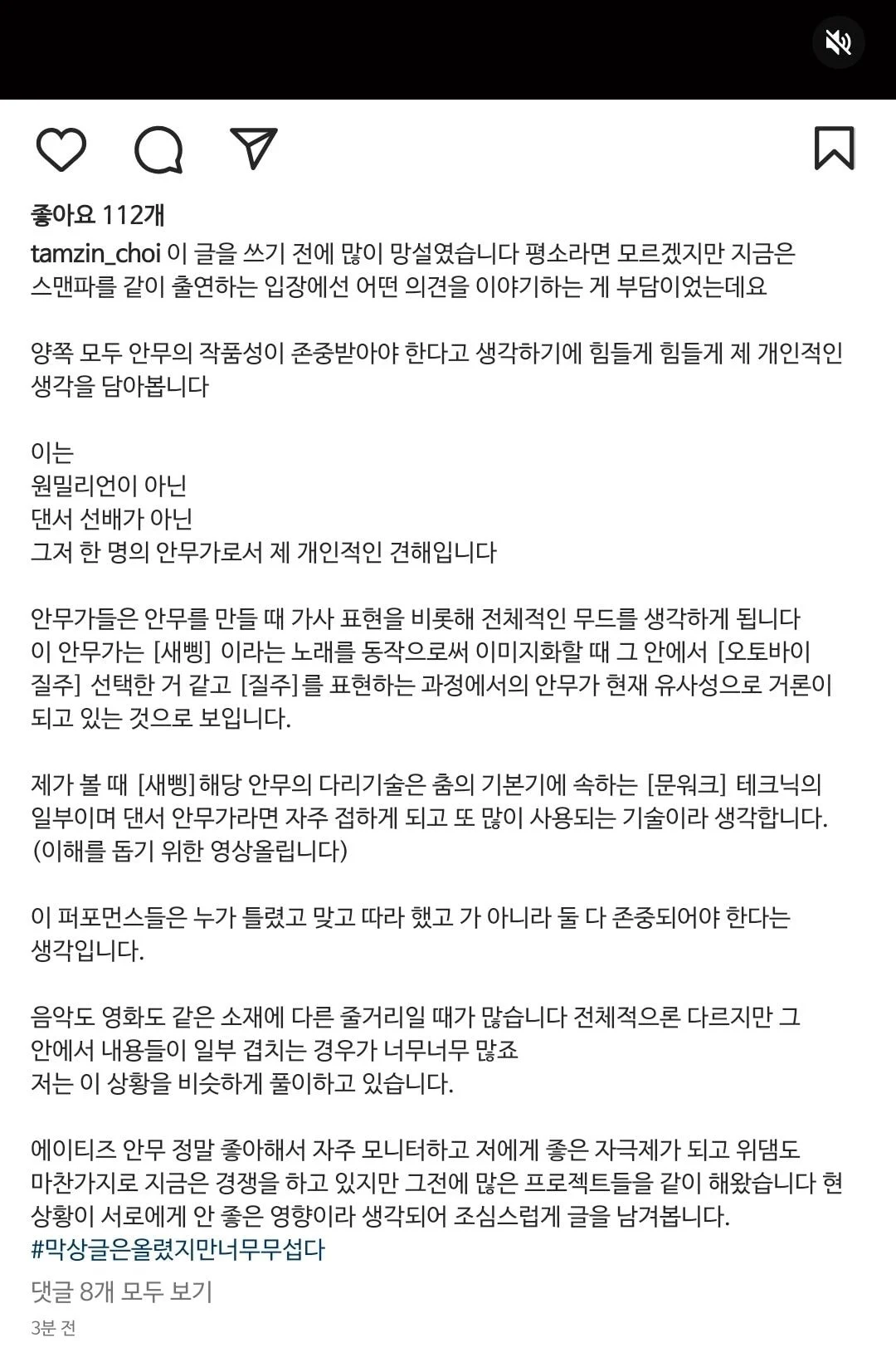 I was very hesitant about writing this post. It would have been different if I weren’t a fellow cast member on ‘Street Man Fighter’, but as I am, I felt a great amount of pressure about taking a side.


Nonetheless, it is with great difficulty that I express my own thoughts, which is that both sides should be respected for the artistic quality of the choreographies.
This is a strictly personal viewpoint that I am expressing as just another choreographer. Not as a member of 1MILLION, and also not as a sunbae in the dance industry, but purely on an individual level.

All choreographers take into account not only the lyrics of a song, but also the overall mood of a song when they create choreography.

This choreography, which creates a certain image of the song ‘New Thing’ through its movements, chose the movement of a rider on a motorcycle. In the process of expressing the act of cruising on a motorcycle, this move sequence is currently being brought to the table for similarities with another move sequence.

But in my opinion, the leg work that is included in the ‘New Thing’ move is a widely known, widely used basic move that is a variation of the moonwalk, and any dancer or choreographer would know of its frequent use. (I have shared a video as an example.)
Thus, it is my personal view that there was no copying involved, there is no right or wrong, but both sides should be respected.

In music and film, there are many productions with the same topic, but different content. There are also instances where the whole picture is very different, but still, there are many overlapping and similar scenes or pieces. I am considering this incident to be a similar case.

I am a fan of ATEEZ’s choreography and I often monitor their work, and they give me positive motivation and the same goes for We Dem Boyz. Even though at this present time we are in competition, I have worked with We Dem Boyz many times in the past. I felt that this current situation is resulting in negative influences for both sides, and so I am cautiously speaking my own thoughts. #Postedthisbutfeelingscared.

2. No but…ㅋㅋㅋㅋㅋDoes he not even know what moonwalk is?…^^ Here, the leg moves all the way to the hand grabbing one waist and one hand driving are all exactly the sameㅎㅎㅎ

3. Even after reading his post and watching his videos, it’s still obvious that Vata plagiarized though?

4. He’s talking about dance copyrights, but releasing this post didn’t help Vata a single bit. Even the examples he gave were about people doing the moonwalk, and even so, it’s not even that common. But if you looked at the choreography that actually got controversial, every detail down the the way they moved and the arms movements were all the same. We actually need dance copyrights in the future

5. So he’s saying that despite the fact that idol companies are paying choreographers so much to make their choreography, anyone can just make a copy of it without any problems in the future? Someone who is actually making choreographies is really saying those words?ㅎㅎ So choreographers can just ake any Youtube videos now and take any move they want

7. What a disappointment for CHoi Youngjun. The way he’s talking about making a statement but it turns out to be just a shield is hilariousㅋㅋ What is there ot understandㅋㅋ

Yunho teaching dem boyz how to do the original choreo. pic.twitter.com/PatUUJ12dh

Grabbing the waist by one hand = common

Grabbing the waist by one hand, while driving a motorcycle the other hand, and moving with the motorcycle motion, while doing the moonwalk and changing directions = common?

ㅋㅋㅋㅋㅋㅋ If you think that this is common, then why don’t people talk about every other moves too? ^^