T/N: we’ve seen a lot of people pointing out the increase of spam accounts in the comment section. We’ve been trying to moderate them the best we can and have brought up the issue to Disqus. They have also noticed beforehand and are also trying to do something about it. Sorry for the inconvenience in the meantime. 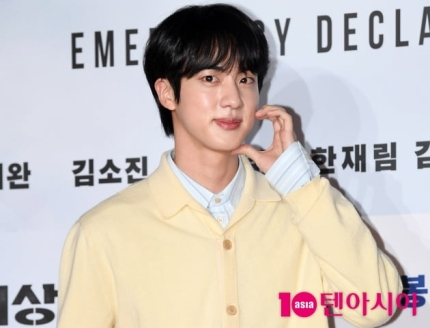 According to media outlet reports on October 18, BTS member Jin is set to release his first solo single later this month.

The single is said to be a song gifted by the English band Coldplay, who previously worked with BTS for the collaboration single “My Universe”. This past weekend, during BTS’s Busan concert held on October 15, Jin hinted at his solo activities by commenting, “I ended up singing something thanks to a fortunate connection with someone I am a fan of.”

[UPDATE] In response to the above reports, a representative of Big Hit Music stated, “Jin plans on releasing a solo single at the end of October. We will announce more specific details, including any collaborations, at a later date. Please understand.”

1. Looking forward to it. Seokjinie is in his pride moment. I’ll have to listen to this song too💜💖👍

4. His connections are seriously goosebumps inducing

5. I’m a fan who’s reflecting thinking that his connections were only limited to Koreaㅋㅋㅋㅋ I didn’t know that he was this world-classㅋㅋㅋㅋㅋㅋ

7. Our Seokjinie’s voice matched Fix You like a glove too! I haven’t listened to his song yet but it’s already good

8. Daebak, Jin must be so happy

9. So when he said that he was collabing with a person he liked, he was talking about Coldplay?ㅋㅋㅋㅋㅋㅋㅋ shockingㅋㅋㅋㅋㅋㅋ

10. Wow daebak, when he said that he was collabing with someone he liked, there was a post in the Hot Category and as a muggle, I thought that he mean Park Jongwon ahjussi (T/N: famous Korean chef). I’m reflecting