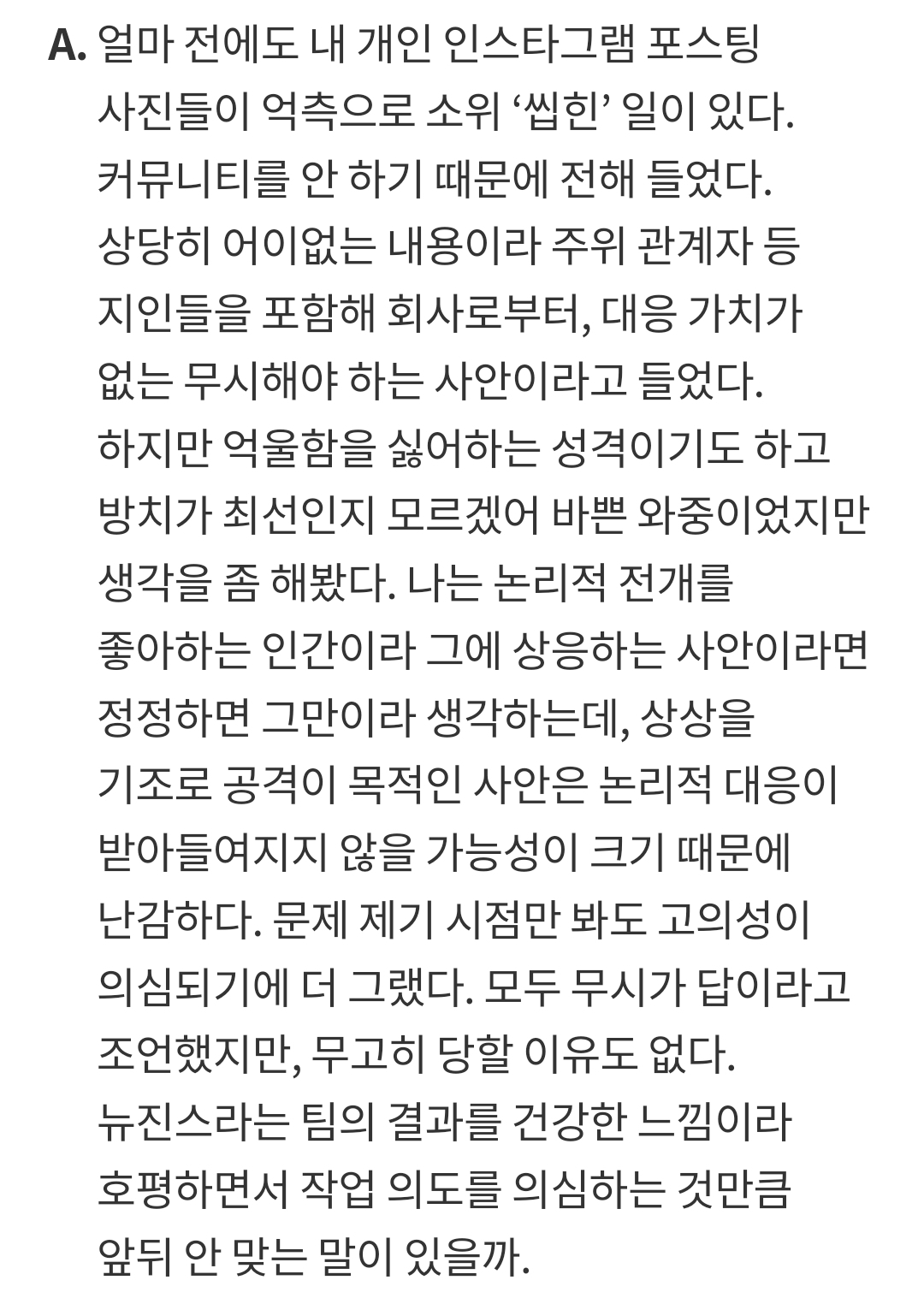 A: Not long ago, my personal Instagram photos were ‘chewed up’ and came under suspicion. Someone reported this to me because I don’t use community sites. Since it was so absurd, I was told by other relatives including people from the company and staff to just overlook the issue and not treat it. But I’m also a person who hates injustice, and I don’t know if neglect is the best thing to do. I was also busy so I tried to ponder a bit on it. I’m a human who is logical, so I thought that the right thing to do would be to correct issue accordingly, but because they’re attacking me based on their imagination, it was possible that they wouldn’t accept such a logical response. Just looking at the time the issue was raised, I was even more suspicious that this was intentionally done. Everyone advised me that ignoring would be the right thing to do, but there is no reason for me to be beaten up like that when I’m innocent. Is there anything more contradictory than praising the result of New Jeans because it feels healthy to do so all the while doubting the intention behind my work? 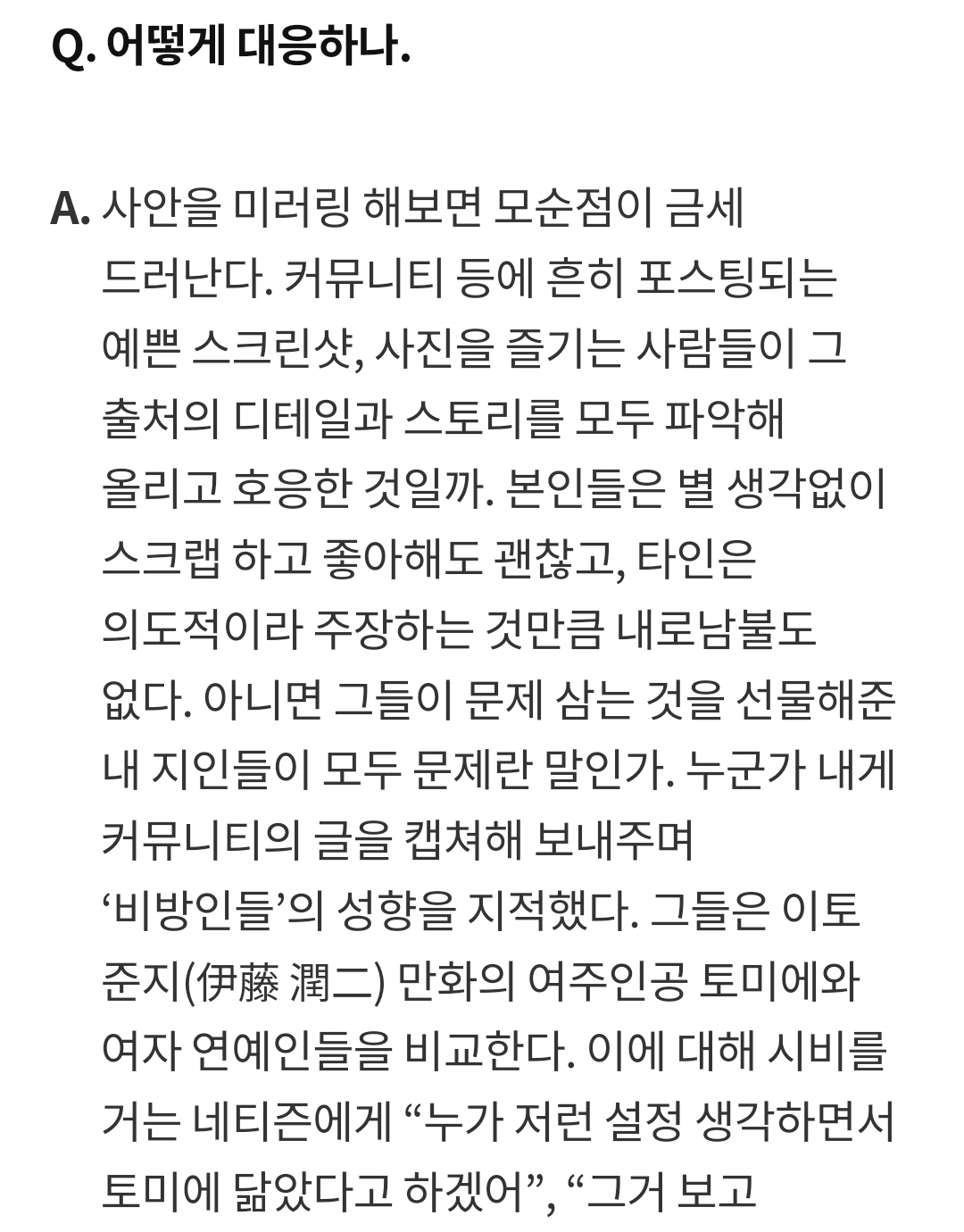 Q: How are you dealing with this?

A: If you’re trying to act ‘eye for an eye’ with this kind of issue, it’s just acting inconsistent. Do people who post pretty pictures on communities do all the detailed research behind the source of those pictures and understand the story behind them before posting them? They’re fine to just scrap [the internet] and take pictures they like without thinking much of it, yet they infer that everything other people do has to be intentional and there’s nothing more intrusive than that. Or if they want to see everything as an issue, then, are my relatives who gifted me those presents the problematic ones? Someone took a screenshot of those communities and told me about their tendencies to ‘slander’ people. People compared female celebrities with the character of Tomie in Ito Junji’s manga. Following netizens’ logic, people can say “Why would you compare them with Tomie considering the setting?” “Tomie has to do with murder, they rather look like XX”. They’re the ones who don’t want others to interpret their intentions but using common sense, aren’t these the same situation?

Among the controversies, there is a picture that is interwoven with a movie that I am not familiar with. The picture has nothing to do with the movie at all, and I wonder why they want to argue with such a small detail in a drawing within a picture? Actually, seeing those slanderers draw critics from fiction is pathetic. There’s no end to it if I wanted to point out everything, but I don’t think they’ll even want to listen if I were to let them know anything.  In any case, according to the company and various opinions that the level of dissemination of false information and blasphemy is serious and should not be overlooked, civil and criminal lawsuits have been initiated. I thought that malicious commenters were also fans, so I gave them a pass, but a significant amount of violations were discovered during the legal review. In order to prevent future problems and to protect the rights and interests of the members, a dedicated organization for Adore was established. 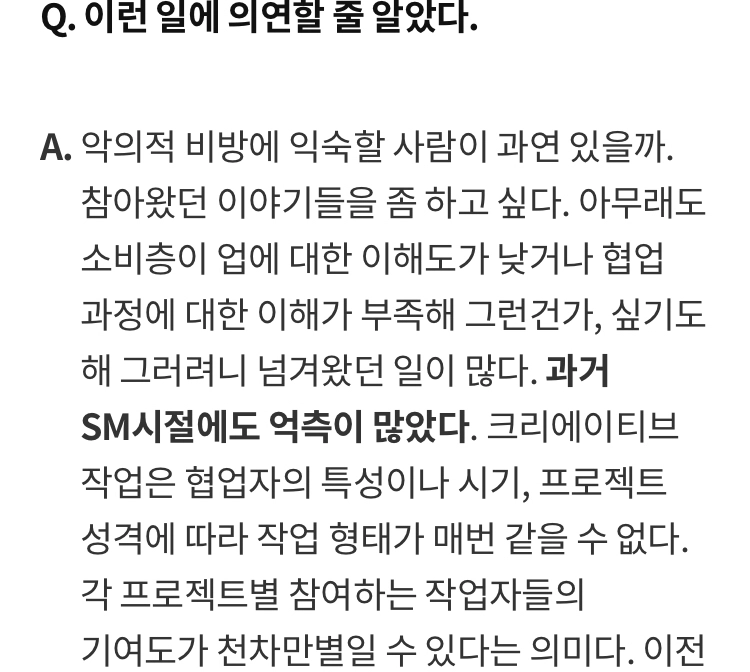 Q: I thought you would be able to handle this bravely.

A: Will anyone get used to malicious slander? I’ll tell you some stories that I have endured. I’ve always wondered if it’s because the consumers have a low understanding of the business or lack of understanding of the collaboration process, so there are a lot of things that I’ve overlooked. Back during my SM days, there were many speculations already. Creative work cannot be the same every time depending on the timing, the project characteristics and the characteristics of the collaborators.

This means that the contribution of the workers participating in each project can vary widely.

1. So why would she hang these one?

> Because it’s a gift and she found it pretty so she hung it without much thought?

2. She speaks well. To the people who can’t understand what she’s saying, read the interview again… People took her previous works together to frame her as a p**o but she even gave feedback from her previous works. If you read what she had to say about Ito Junji, you wouldn’t have anything to say anymore

3. She did well suing, seriously the level of hate she got was way too oba

4. I’m not sure about other things, but I totally agree with the the Tomie thing … Everyone only likes Tomie because of her looks and charms <- but they only talk about that when they compare people with Tomie and I was always surprised by that as someone who read the manga…

6. She’s saying herself that those are speculations, why aren’t people believing her?

7. But she had so many controversies like that even from the past no??? Even in SM, she had controversies, so you’re telling me that all those weren’t her intentions but just speculations?

8. So she’s posting those screenshots from movies just because she found them “pretty”?ㅋㅋㅋ People calling this forced, what’s forced in this??

9. But Cookie… I like the song’s performance, but the song is still a bit weird.. We’re talking about a 14 y’o…

10. Anyone would think that she only had controversies with her Instagramㅋㅋㅋㅋㅋ Aren’t the works that she produced so far the more controversial part of this?