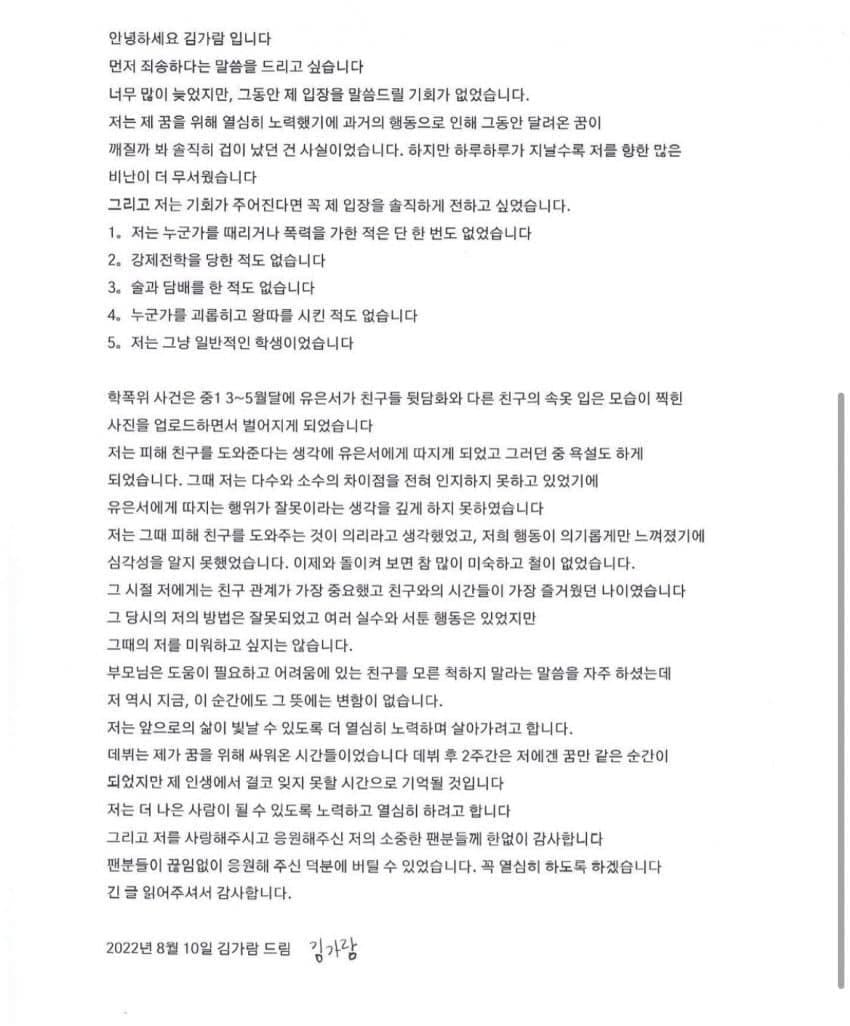 Hello, this is Kim Garam.
First of all, I want to convey my apology.
I might be too late, but I didn’t have any opportunity to share my position until now.
I put a lot of effort and worked really hard towards my dreams, but it was true that I was frightened that my past actions might break the dream I had been running towards. However, as each day passed by, I got more and more scared about the criticism directed towards me.
And if given the opportunity, I wanted to express my position honestly.
1. I have never hit or assaulted anyone
2. I have never been forced to transfer school
3. Never drink nor smoke
4. I have never harassed or bullied anyone.
5. I was just a normal student
The school violence incident occurred in my first year of middle school between March~May, when Yoo Eunseo was caught talking bad behind other friends and took a picture of another friend in their underwear and uploaded it.
I started arguing with Yoo Eunseo because I thought I was helping my friend who was the victim, and I ended up swearing at Yoo Eunseo. At that time, I was unaware of the difference between the majority and the minority, so I did not deepen the thought that it was wrong to argue with Yoo Eunseo.
At that time, I thought it was righteous/loyal to help my friend who was the victim, we didn’t know the seriousness of our actions because we felt rewarded doing it.
Looking back now, I was very immature.
At that time, friendship was the most important to me, and I was at the age where I would enjoy my time with my friends the most. My method at that time was wrong, and there were many mistakes and clumsy actions from my part, but I don’t want to hate myself for what I did at that time.
My parents often told me not to ignore a friend who needs help and is in trouble.
As expected, at this moment, I don’t want to change the meaning behind the actions I did back then.
I am trying to live my life by working harder so that my life in the future can shine.
The debut was the time I spent on the dream that I fought. The 2 weeks after my debut felt like a dream, but it will be remembered as a time I will never forget in my life.
I try hard to become a better person, and I am infinitely grateful to my precious fans who loved and supported me.
I was able to survive thanks to the constant support of the fans. I will do my best.
Thanks for reading this long post.
Kim Garam
+ She released it on her Instagram
original post: here
1. Isn’t she even embarrassed for s*xual comments? It’s f*cking funny to see her playing dumb and trying to crawl backㅜ  She should just stay hidden, even immigrating to another country wouldn’t be enough for herㅎ
2. She didn’t even reflect one bit, I don’t want to see her again even as a commonerㅋㅋㅋㅋ
3. It’s just a fact that she received the 5th level of punishment, but she didn’t even reflect one bit and just released this ?
4. So she thinks that because she didn’t hit anyone, she didn’t commit school violence?? She was sending swears and telling people she’d gang up against them on Katalk, how scared would those people feel?
5. Her brain has stopped in middle school.
She’s claiming she couldn’t differentiate between the majority and the minority so she was short-sighted, but she’s also saying that she wouldn’t change anything now… What a dumba*s
6. !! Her IG handle is: y__urm
7. They did the right thing kicking her out
8. She’s really self-pitying herself, what an amazing kid…
9. “I’ll do my best”? Yeah just go do your best in your life as a commoner ~
10. I just went to her IG and read everything… She really said she doesn’t care what she did in the past, she still wanted to be a celebrity, interesting
New post
Next Post
✉ PC Stories