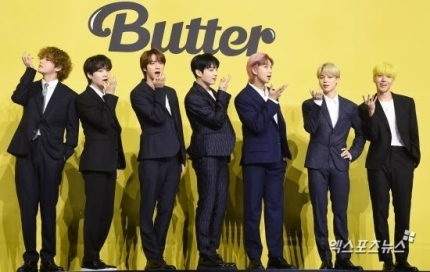 The record-breaking revenue came from HYBE artists’ album sales, promotions, and concerts, as well as merchandise and IP licensing.

HYBE acts sold a total of 8.53 million copies of albums in Q2 2022, recording a revenue of KRW 210.9. Album sales were led by global pop icons BTS, plus TXT, SEVENTEEN, and ENHYPEN, whose albums all sold over 1 million copies.

Meanwhile, rookies LE SSERAFIM and NewJeans also contributed significant numbers with the former selling 410,000 copies of their debut album, FEARLESS, and the latter amassing over 440,000 pre-orders for their self-titled debut EP.

Shows such as BTS’ PERMISSION TO DANCE ON STAGE – LAS VEGAS residency and SEVENTEEN’s BE THE SUN – SEOUL concerts (which were both livestreamed to global audiences) pushed concert revenue to KRW 85 billion, up 38.6% QoQ.

Meanwhile, HYBE artists’ merchandise and IP licensing also grew by 42% QoQ and up 97.2% YoY with a total of KRW 98.8 billion.

CEO Park Ji-won said, “HYBE will continue its efforts to launch new artists in 2023 by strengthening its multi-label system even further”. “We are also working on a project to launch a new US-based idol group and will expand our global business strategy through localisation,” he added.

HYBE’s IR conference also shared the success of BTS Island: In the SEOM, the interactive mobile game co-created by the members of BTS. Since its release last June, it has garnered over 6 million active subscribers and recorded up to 2.15 million DAUs (Daily Active Users).

1 But why are my stocks… Ah… nevermind

2. Why do I hate it when they’re showing off their sales like that.. (My bias is in Hybe)

> My bias is also in Hybe but I find them so annoying, I just want them to fail…

> It’s because… They’re earning so much money, but they’re still treating my bias like a mess

5. You’d think that they’re earning that much to invest proportionally in their artistsㅋㅋ None of their earnings are going to my bias; I hope they fail

6. They’re making money off my bias working to his bone, I hate seeing them show off like that as if they’re the ones who are improving their ways of working

8. They should treat their artists as well as the money they’re earning…ㅠ

9. Can they use a bit of the money they earned?

10. Why are they showing off their sales? This is just any other company’s report that they need to do for the market