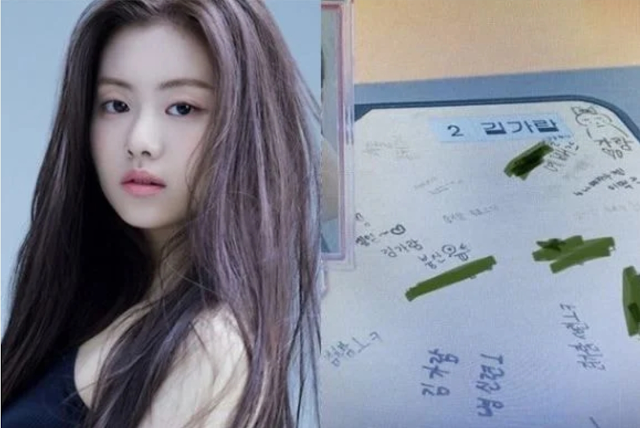 On the 1st, a post titled ‘Kim Garam’s current status’ spread around online communities and SNS. In the photo, a desk full of profanity with the name Kim Garam written on it can be seen.

The authenticity of the photo has not been confirmed, but if it authentic, it is presumed that it was taken by a student attending the same school as Kim Garam.

In addition, there are voices of concern that Kim Garam may also be a victim of school violence such as verbal abuse or bullying and becomes a victim of secondary abuse.

Earlier, on the 20th of last month, Source Music and HYBE, the management companies of Le Sserafim, announced the termination of their exclusive contract with Kim Garam. The agency had initially maintained that Kim Garam was a victim of school violence, but it was interpreted that the termination of the exclusive contract actually confirmed the suspicion of Kim Garam being a school violence assailant.

> If she debuted once, then we should talk about her here

2. I don’t know if she’s still with the same people in her class but if they claimed that she was an assailant, then they shouldn’t be doing the same thing back to her. They are just becoming the same person in the end.

> But they are not the same person… our country sure protects the bullies well!!

3. Everyone knows her face now. To be honest, even if she’s a commoner, we can talk about her here

> Her company is seriously…. they should’ve never debuted her. Honestly speaking, everyone knows her face now and she also seems to have become the victim of school violence in the end

> I do worry about her even though she was a bully…. Her company is the worst here. She’s still just a minor after all

4. Oh boy… seems like they are doing the same thing back to her… f*cking immature

5. Why are they doing this…

6. The kids doing this to her are just the same as her… sigh

7. But I feel like she’s not gonna be able to go to school anymore

8. Makes me wonder if this is all her karma…

9. But it also makes me wonder how many enemies she has in school to have something like this..

10. Just why are they becoming the same as her… damn…

11. So she’s still a student now huh…. how is she supposed to go to school now?ㅜㅜ

12. She should’ve never debuted and just live as a commoner