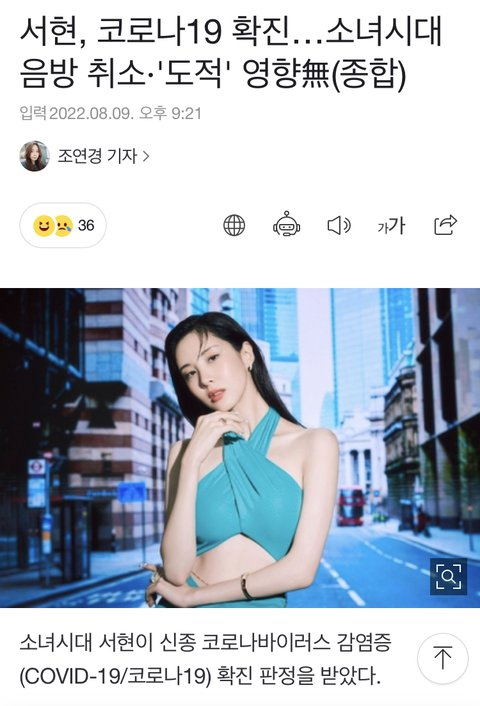 On the 9th, SM Entertainment, the management company, announced the news of Seohyun’s Covid 19’s infection through the official website and said, “Seohyun is in a situation where she immediately stopped all schedules while receiving treatment and rest.”

Due to Seohyun’s diagnosis, Girls’ Generation’s schedule, which was to prepare for their music show appearance in the first week of their comeback, was completely canceled. SM added, “Inevitably, the Girls’ Generation’s music show schedule for ‘M Countdown’ and ‘Inkigayo’ planned for this week has been canceled, so we ask for your understanding.”

SM is known for running away if they cannot get the ending stage or #1. Even for EXO, ever since 2017, Bangtan stole all their Daesangs so they sat out from awards ceremonies. Just look at how they’ve been skipping the ending in ceremonies like Gayo Daejeon and whatnot. They are freaking cheap

If it’s just one person, then can still perform just fine. They are too obviously running away

If they could win #1, they would’ve performed even if they were 7

You guys who were hating on them for 16 years now, can’t you just stop?ㅋㅋㅋ they will appear next week so what “run away”? Also, one person caught it so is it that weird that the 8 others are not showing up?? You’re saying that 7 of them can appear? This is their 15th years’ anniversary though? The reason why this comeback is meaningful is because it’s been so long since they’ve had a full group comeback. If 7 of them appeared, then what’s the point of it? Do you think that SNSD is appearing to build their career and to gain popularity? Seriously, you guys are acting so immature every time and are so obviously just trying to hate on them that I wanted to just laugh and let it slide. But I couldn’t hold back seeing that this was due to Covid and that you guys are hating on them so openly like that so I’m leaving a comment. It’s not like SNSD were an active group right now so I just don’t understand why you guys are still so obsessed with them

You can see their intentions way too clearly here