For reference that person releases anecdotes about celebrities in drawing 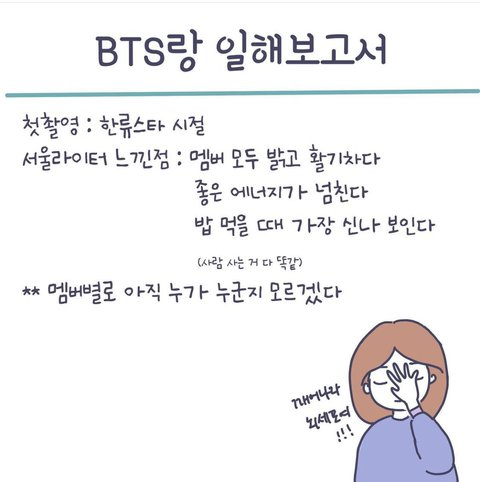 First shooting: When they were just Hallyu Star days

– All the members are bright and bubbly

– Their energy was overflowing

– When they ate, they looked the most excited

At that time, she didn’t even know who the members wereㅠㅋㅋㅋㅋㅋ 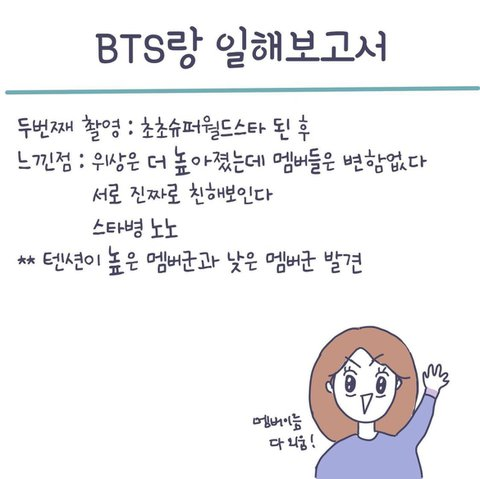 – Even though their status raised, the members didn’t change

– They seriously look close to each other

– They have no star disease

** I can distinguish the members who are high tension and low tension (T/n: tension in Korean means energy) 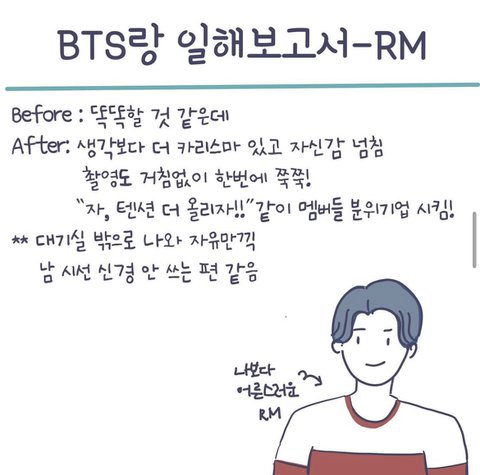 Before: He seems smart

– He doesn’t hesitate during shoots, he just goes straight in!

** He comes out of waiting rooms and just acts freely, he seems like the type who doesn’t care about what other people think of him

(arrow: RM is more mature than me) 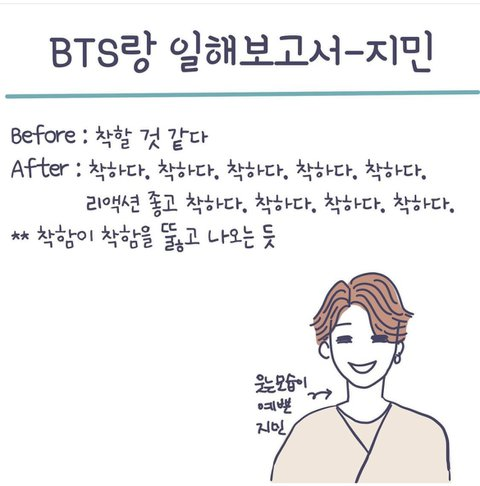 Before: He seems kind

** He’s beating his own kindness with kindness

(arrow: Jimin is pretty when he smiles) 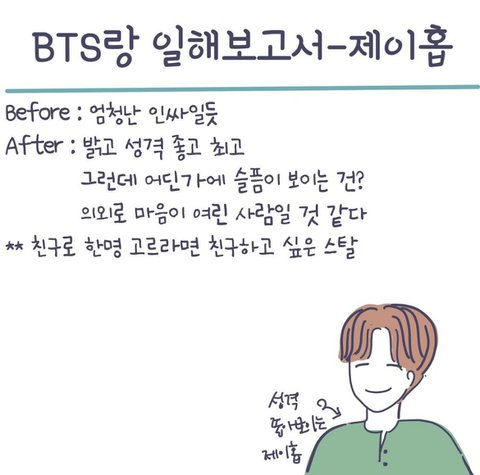 Before: He looks like an overwhelming inssa (t/n: insider = popular kid)

– He’s bright and his personality is the best

– However, he also seems sad somehow?

– His heart is unexpectedly younger than you think?

(arrow: J-hope who seems to have a good personality) 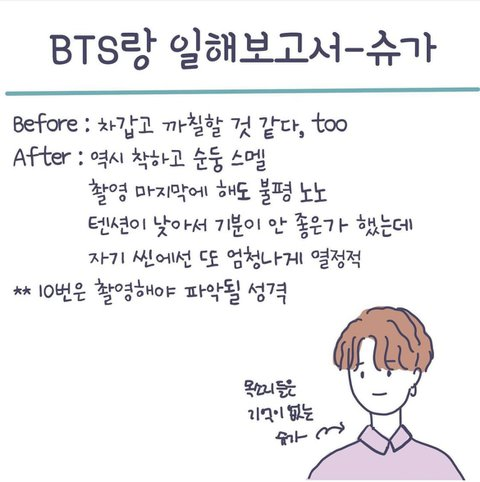 Before: He seems cold and sassy too

– As expected he has the kind and soft smell

– Even when he’s the last one to shoot, he never grumbles

– His tension is low so I thought that he was in a bad mood, but when he was shooting his scene, he’s overwhelming with passion

** His personality unfolds only 10 times after you shoot with him

(arrow: Suga whose voice I don’t remember ever hearing) 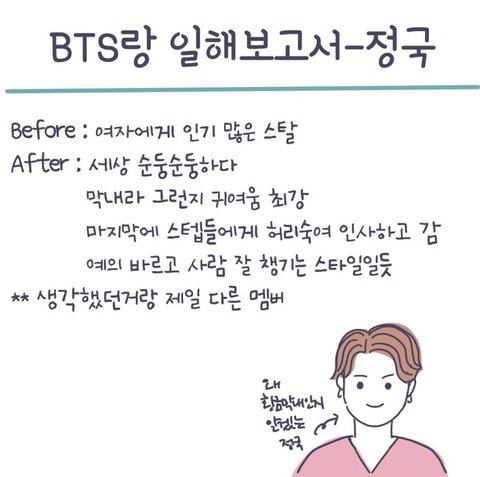 Before: The style that women likes a lot

– He’s the softest in this world

– Maybe because he’s the maknae, but he’s also the cutest

– When he has to bow to the staffs at the end, he’s polite and he’s the type who takes care of people

(arrow: I know why Jungkook is considered the golden maknae) 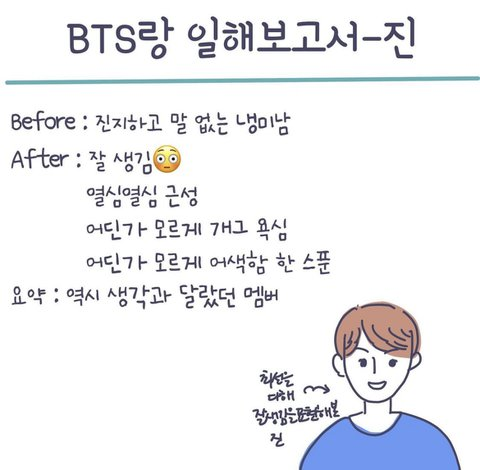 Before: He looks like the cold flower boy who is serious

– He has a strong will to work hard

– He’s also greedy to be funny at unexpected moments

– He also adds a spoonful of awkwardness at the unexpected moments

Summary: as expected, he’s different from what I thought

(arrow: Jin who gives everything he has to express his handsomeness) 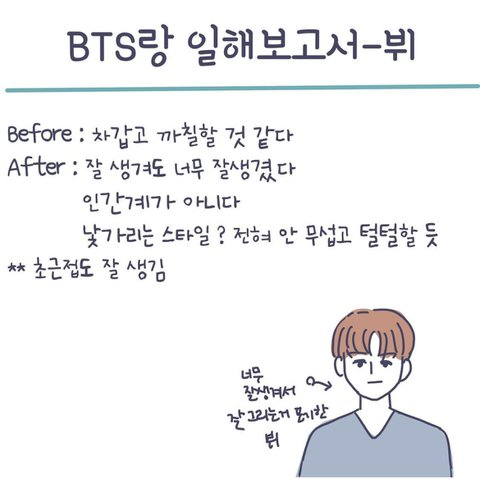 Before: He seems cold and sassy

– He’s not of the mortals

– Maybe he’s scared of strangers? But he’s definitely not scary and he’s talkative

** He looks handsome even super close

(arrow: V who is so handsome, I can hardly draw)

“They look the most excited when they eat” that’s right, it’s our kidsㅋㅋㅋ

No matter what people say, I love all 7 of them seriouslyㅠㅠㅠㅠㅠㅠㅠㅠㅠ

BTS shot an ad with Jessi before hitting big and this is what Jessi said about themㅋㅋㅋㅋㅋ Seriously everyone looks so friendlyㅋㅋㅋ And even after 10 years, they’re still fooling around in their practice room 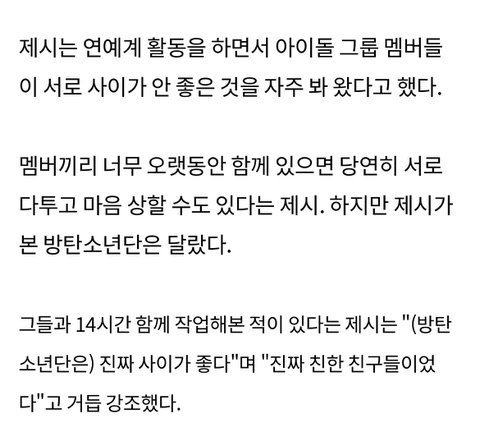 “Jessi said that promoting in the entertainment industry, she has seen a lot of idol groups whose relationship didn’t look good.

When you have members who spent a lot of time together, of course, you’re bound to get into conflicts and there are instances where you hurt each other. However, Jessi said that BTS was different.

They spent 14 hours together working and Jessi said “[BTS]’s relationship is seriously good. They look like actual close friends”.”

There was someone who worked with V in the past for Lotte department shop too, I really wonder what his real life visuals are that everyone is claiming he’s so handsome for? ㅋㅋ

I still remember that some advertisers mentioned that after seeing V, they all automatically started smiling, this reminded me of that. And looking at her drawing, it seems to be the same person 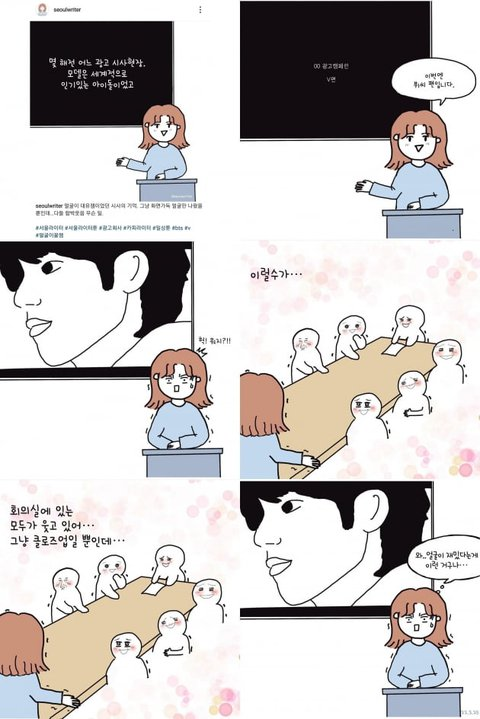 (t/n: the cartoon is talking about the MC presenting the model for the ad and everyone started smiling the moment she showed V’s close up)